Was Michelangelo a Sell-Out?

Hundreds of years ago, Michelangelo Buonarroti lay flat on his back atop an enormous scaffold in the Sistine Chapel, slapping paint into damp plaster. He did this for months. Years, even. When finished, he’d created one of the world's greatest whiplash inducing frescoes. In the centuries since, the definition of what constitutes art has changed drastically. We impose a modern perspective upon Renaissance artists (Michelangelo, Botticelli, Perguija, Ghirlandio, and Rosselli for example) and forget that they worked within a very specific context.

Italy of the 15th century was divided up into dozens of piddly little warring city states, each pushing their own Renaissance art team. Think of a football league, only made up of painters and sculptors. 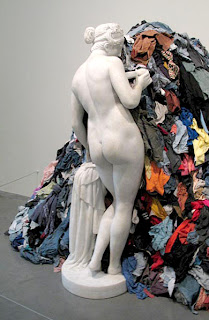 Artist guilds slipped the Catholic Church kick-backs (called 'donations') in exchange for the right to work. And the biggest employer, the biggest ad account, was the Vatican’s.

Artisan ancestors of Don Draper were kept busy from dawn till dusk, pumping out everything from nick-nacks for doe-eyed pilgrims to massive, sculpture encrusted cathedrals.

Depictions of Biblical scenes were in high demand, as the population took events in The Bible literally. The Flood was just as real as Confederation, World War II, and the moon landings are for us. No one doubted the world would end in The Last Judgement with lots of explosions and expensive CGI. 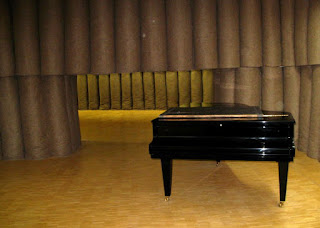 Peasants couldn’t read text, which they distrusted, but they could understand iconography, and that’s how painters communicated with them. A whole library worth of signifiers, pictograms within pictures, were stuffed into Renaissance paintings. Modern viewers know little of these symbols, throwing the deeper meaning of Renaissance art out of the layman’s reach. An appended essay, translating symbols back into words, is required for the art to be fully understood.

Of course, back then there was no such thing as an 'aah-tist.’ Berets had yet to be invented and black was just Satanic. Painting was not a calling, but a craft, no different from being a plumber or carpenter, and the skill set was passed down from parent to child, family biz style. Picasso, Raphael, Rockwell, and Mozart were all sons of artists.

Kids didn’t make decisions. Parents did. Autonomy for teens would have struck Florentines as madness. Maybe they knew something we have forgotten.
Painters weren't sanctified, at least not until after Vasari. Unlike the modern cliché of artist as a moody misanthropic loner, Renaissance artisans worked together in open shops called Botteghe. Like animation studios, sans cubicles.

Artists today stick with it despite starvation and hardship. By comparison, Renaissance artists were a bunch of profit-oriented sell-outs. There. I said it. Leonard Da Vinci himself was a relentless self-promoter, famous for his boastful 'resume'. It was business, and staff would be added or fired according to market forces.

Each shop was run by a Master, who made the master designs and took on the more complicated painting tasks. They’d procure clients, oversee commissions, and organize promotional work. Each shop was carried by the prestige and style of The Master. He was The Brand. A Michelangelo isn’t the product of just one man, but an entire commercial studio. Like Pixar or BBDO.

Apprentices handled drudge work, such as mixing paint. Basically whatever the master didn’t want to get his lily-white hands dirty with. They copied the master’s house style until people couldn’t tell the difference between them. Then they ran off and founded their own studios.

Shops worked on shields and armour as well as altarpieces, keeping diversified, just as freelance artists today will airbrush canvases, T-shirts, vans, mugs, and whatever else you put in front of them. Banners, beds, chests, plates, and drapery are what kept many studios in business. Only a small portion of their work consisted of prestigious altar pieces or what would be considered 'fine' art.

Each altar piece was designed for a specific Chapel, and was meant to be seen in context. Bluntly put, The Master designed it to look good over the couch and compliment the colour of the drapes.

Sculptors made more than just statues of little boys urinating, although there was plenty of that. Sculptors created altar tables, altar rails, ciboriums, tabernacles, architectural decoration, furnished tombs, pulpits, statues, portrait busts, medals, private altars, fountains, and reliefs. Even then you had to diversify to survive. Miniaturists were employed in the illustration of manuals, books, chronicles, and Bibles. Some even stooped to designing fortifications and armaments for their patron Dukes and Princes. Screw peace, they had to make a living.

Studios were heavily regulated by the guild system. To do important commissions, you had to belong. On the plus side, guilds would arbitrate between patrons and artists when disputes arose. Always good to have a big gang armed with clubs when you go to collect. We should bring that part back.

The divide between craft and art begins with Vasari and the insufferable name dropper Benvenuto Cellini, who wrote an autobiography in which he portrayed himself as being a divinely inspired creator deserving of a special category. This attitude was held by many of the men in service to Popes, Princes, Emperors and Kings. Did I mention Cellini knew the Pope? Because he would. Over and over and over again, every time you met him.

The idea of art as a 'quasi-divine' calling met with a collective ho-hum, however, and did not capture the general imagination for hundreds of years. But aah-tists kept at it. Painters were eventually elevated by this change in perception, but craftsmen got shafted.

Michelangelo wrote, “True art is made noble and religious by the mind producing it. For those who feel it, nothing makes the soul so religious and pure as the endeavour to create something perfect, for God is perfection, and whoever strives after perfection is striving for something divine.”

Quality is its own reward.

Back to the frescoes of the Sistine Chapel. Did Michelangelo put a fresh slant on old ideas? Nope: the Catholic Church was not about to let its official line be challenged or usurped, least of all by someone without proper credentials. It’s a great work because of the exquisite draftsmanship, vibrant colours, and powerful composition. All hallmarks of craftsmanship.

And Michelangelo was a superb craftsman, standing far above his contemporaries and wagging his talent in their disconsolate faces. What he illustrated (and I use the word deliberately) were not original ideas torn from his anguished psyche, but scenes from The Bible.

It’s pro-Catholic propaganda, designed to exalt The Church and impress people with the greatness of said institution. Nothing wrong with that. Yet were Michelangelo to do an equivalent work for Pepsi, would it still be regarded as Fine Art, or would he be indignantly castigated as a despicable sell out? 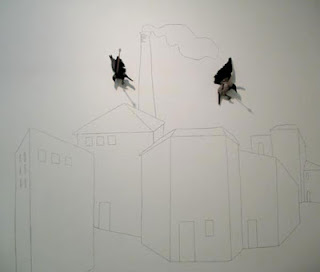 True, Michelangelo believed in God, and there is a difference between product and belief. Yet artists who fervently believed in communism, such as Rodchenko or Melnikov, are derided as mere propagandists.

Jacopo Gallo, instrumental in hiring Michelangelo to execute the Pieta, wrote in 1498 to the cardinal of St. Denis, “And I, Jacopo Gallo, promise his very reverend lordship that said Michelangelo shall finish said work in the space of one year and that it shall be the most beautiful work of marble in Rome, and that no living master shall be able to make one as beautiful.”

Spirituality through the superficial? 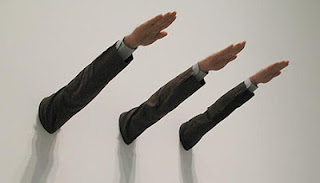 Michelangelo began work when commissioned, while today artists reverse the order: they create and then sell. Commission work implies exterior control and influence; for a fine artist such a situation is obviously intolerable. And while modern artists disdain craft and technique, it remains important to their 'lesser' commercial counterparts. The purpose of the commercial artisan is to communicate ideas and emotions. They don't have the option of tacking an essay beside it. Renaissance artists did not use obscure, self-referencing language that confounded the general public. It was not the artists purpose to confuse or obscure, but illuminate.

Modern art is in danger of speaking only to itself, confusing obscurantism with sophistication. Yes, some work is magnificent and ground breaking. Everything fine art should be. No question. Yet there is a dark incestuous, self-referencing side to it.

Work must be evaluated by qualified, credentialed critics. Emphasis on credentialed. The people? The public? Not permitted an opinion, at least not according to decidedly self-serving university professors who combine Maoist self-criticism and art critique.

Art, as defined by the anthropologist Alexander Alland is "play with form producing some aesthetically successful transformation-representation." Art communicates information. Anthropologists have found art to be intimately related to both politics and religion. Marvin Harris, a prominent anthropologist, writes that, “In Western civilization a particular (work) is deemed artistic if specialists who make or judge art and who control the museums, conservatories, critical journals, and other organizations and institutions devoted to art as a livelihood and style of life judge it to be art.” 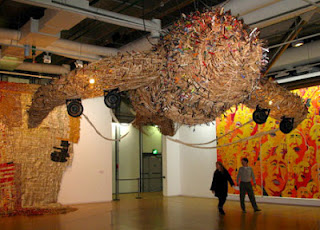 He goes on to state that the modern Western concept of art excludes everything that has a practical or commercial purpose: art must be strictly non-functional to be considered such.

A hat that can be worn is not art.

Art may be aesthetically appealling, but not too much, lest it become decorative. And the technical execution of a work should be sloppy, lest it be mistaken for craftsmanship.

The distinction between art and craft is a unique aberration of Western culture. Elitist art communities in Canada do not regard skilled wood carvers, basket-makers, weavers, or sandal makers as artists. Anthropologists, on the other hand, do. Sad to think a so-called primitive society has no art simply because their artwork is functional or decorative. 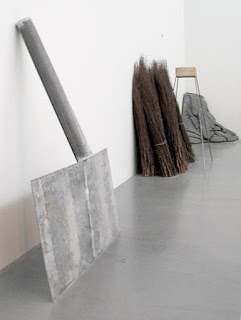 According to Harris, “Establishment art in modern Western culture is unique in emphasizing structural or formal creativity as well as creative transformations. This results in the isolation of the artist. Lack of communication may be caused by factors such as the reaction to mass production, commercialization of art markets, a rapid rate of cultural change, and the depersonalized milieu of urban industrial life.”

Renaissance artists bear little resemblance to today’s modern 'artist', but are remarkably similar to commercial ones. Commercial art is denounced as mere craft, but it should be remembered that it is a self-interested and self-appointed minority who affirm and seek to perpetuate this distinction.