Hell 101: The Iconoclasm of the Chapman Brothers 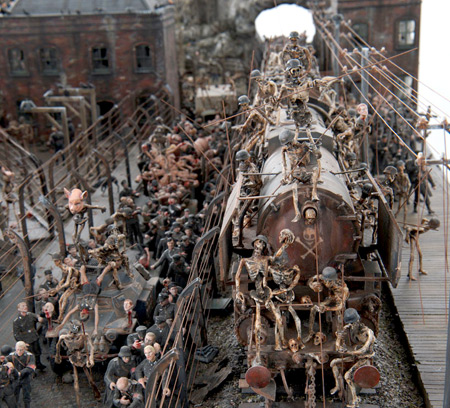 This macabre diorama, central piece of The End of Fun exhibit and created by the Chapman brothers, is disturbing despite itself. It's highly evocative of Bruegels' The Triumph of Death, only with a modern twist: Holocaust meets Fucking Hell.
It's WTF Art. This is dark, twisted stuff.

Recently displayed at the State Hermitage Museum in St. Petersburg, it managed to offend just about everyone. The exhibit was NC-18: no one under 18 permitted. How often do you see that rating at a major international level art gallery?

More interesting than your neighbour's model train set, Fucking Hell uses 30,000 tiny plastic figures to recreate the Holocaust in 28 square feet.
It sold for half a million pounds. Not too shabby for a diorama.

According to Jake Chapman, "This is an event that's beyond representation. Using toy soldiers is a way of emphasizing the impossibility of that. Here are these little figures that are totally incompatible with the pathos they're supposed to support."

Or is the piece a McHolocaust? Ronald McDonald appears on a crucifix in the midst of it all. 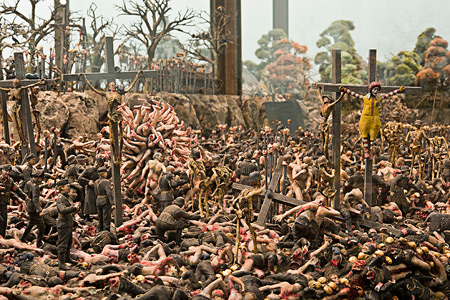 In fact, there's a whole field of Ronald McDonalds, not to mention his buddy the police burger. 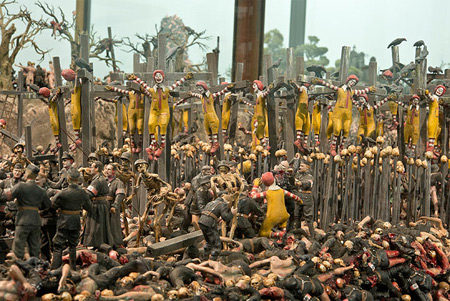 In one scene, poor Ronald sits atop a raft with a clutch of hamburgers while swastika branded sharks circle. Honestly, what drugs are these guys doing?
I used to think they were a happy marketing family, yet below they prepare Ronald for the cross.

Oh, what a cruel world. 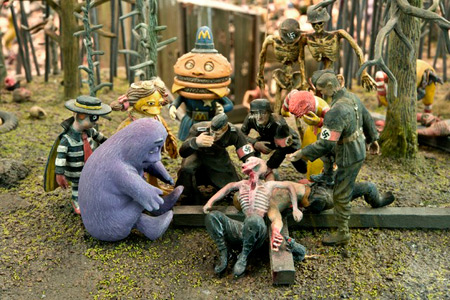 Is no commercial icon sacred?

The diorama has been built twice; the first version, entitled Hell, burned down in 2004 in a warehouse fire. Undeterred, they took out three years and built it again, only this time called it Fucking Hell.
Hitler naturally makes multiple appearances. Sometimes he's painting a hot babe, other times he's imprisoned by Nazi astronaut zombies. The scene is awesome in its lunacy.
Is it puerile or profoundly provocative? Whatever you may think of their work, it's never boring. Editor and critic David Lee likens it to watching a car crash, and others have referred to them as 'court dwarves'. Mayor Giuliani of New York branded them perverts.
Connoisseurs of the bizarre, twisted, macabre, provocative, darkly funny, and offensive, this pair of devout iconoclasts consistently push the boundaries of good taste. In 2003 they were nominated for the prestigious and infamous Turner Prize.

Graduates of the Royal College of Art, they started collaborating together in 1991, mashing plastic models together into unholy creations. If little bits of epoxy, paint, and plastic can be unholy, that is.

Their art work frequently touches on topics such as war, torture, disaster, and commercialism. A strong (obsessive?) anti-fascist element runs through it.

The Rape of Creativity show at Modern Art Oxford displayed a mint collection of Goya's etchings that the Chapman brothers had defaced with funny faces. They titled the piece Insult to Injury.

It stuck a thumb into the eye of art criticism, and the brothers didn't stop there.

You get the impression they're trying to be provocative.
They've created sculptures of children with genitalia instead of facial features. Death shows two blow up sex dolls (made of bronze but painted to look like plastic) in obscene, inverted embrace.

Their imagination is twisted in ways I cannot even imagine; no other contemporary artists are as fit as this pair is to do Hell's interior decorating. These guys were born for the task. Hell Lost is not even a tenth as disturbing. I could do with some of their choice narcotics.

Jake Chapman had this to say to the Independent: "We've never pretended that our art is anything other than extremely elitist. It's not for Sunday afternoon gallery goers... We're not interested in the idea that museums or galleries are redemptible spaces for bourgeois people to come and pay their dues to culture. Just because looking at a work involves your eyes, there's this dumb notion that anyone with eyes can have a justified opinion about it."
Posted by James Turner at 07:05