The walk away from explosions: Blunderbuss Cinema

Lynda Obst writes that with the collapse of DVD sales, profit margins on Hollywood movies have fallen 50 percent.

According to producer Peter Chernin, the trouble started in 2008. Why do I keep hearing that year being associated with collapse? So odd. Anyway, the studios 'are paralyzed', their golden age of profits receding into the mists of champagne soaked memory.

3D surcharges are not enough.

The domestic market is not enough.

The studios have to look further afield.

Mix explosions, bulging biceps, heaving bosoms, sex, cardboard characters, quick edits, chase scenes, gunfire, a pounding soundtrack, simple catchphrases, and lots of noise together, shake, and then blast it at the audience. Stun them into submission with sheer spectacle, overwhelm them with sound and fury that ultimately signifies nothing but box office returns. They'll be too shocked to care about meaning, or even notice its missing. They'll be more worried about their hearing loss.

That's what's coming down the pike. Rather than starting slow and building up, the new paradigm will start with a bang and keep on banging, rushing at break neck speed to a spectacularly senseless, dazzling finish. Yada yada yada, catchphrase, explosions, coolness, The End!

Plots will have massive holes in them (See Man of Steel and Star Trek: Into Whatever) and exist only to link together massive, mind-blowing set pieces.

The great thing about explosions is that they don't require translation. And the ultimate in cool is the slow, indifferent saunter away from the blast. See for yourself: 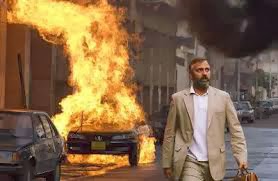 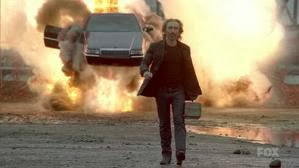 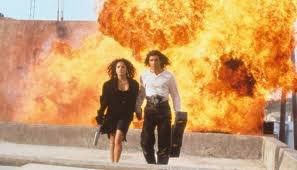 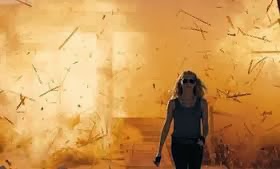 Never let them see you sweat.

Huge, lumbering 200-million dollar blockbuster monsters need a world wide audience to feed them. Nothing less will do. They'd starve, and no one wants poor Godzilla (such a cutie!) to go hungry. So dialogue will diminish while explosions and chase scenes multiply like rabbits.

Transformers I, II, and III are perfect examples of Blunderbuss Cinema. These films assault eye balls like they were the beaches of Normandy on D-Day. There's no finesse here, no SEAL team, no elite 007 agent, just brute spectacle and primal emotion run amok, completely untied from reason and logic, with cuts so quick you can't tell what the hell is going on. It's verging on abstract. Think Jackson Pollock painting with a flamethrower. FUWHOOOOSH!

Avatar has many elements of Blunderbuss but is elevated by Cameron's superb command of craft. Still: unobtainium? Yeesh. Proof even a genius can slip. On the other hand, Avatar and Titanic are the two highest grossing movies of all time, and that which succeeds you'll see more of. Tranformers III sits at number 6. God help us. The bottom line is that Hollywood is a business, and what we patron is what they make. The Avengers witty punching-fest is third. At least there's hope.

Iron Man III, oddly enough, rises above Blunderbuss thanks to the wit of Robert Downey Jr, the coolest special effect in the movie. He is the franchise. Well. Plus explosions.
But will he be necessary in the future? Can he be replaced by a cheaper filter effect?

Has it always been this way? Yes, only now it will be much, much more so.

Personally, I love a good explosion. I've got nothing against beautiful bodies embracing in front of collapsing cities while aliens attack and flames gush out of the earth in the background. My real objection? Glaring plot holes as wide as chasms, terrible dialogue, and twists that make no sense whatsoever. Some logic gaps are going to exist, true, it's the movies, but they don't have to be big enough to fly a planet through.
At least try to plug plot holes so it doesn't look like you have total contempt for the intelligence of the audience. A few fig leaves, at least, to cover that big, lolling narrative obscenity. Don't leave them out in public view for children to see.

Perhaps I'm outgrowing the blockbuster. The movies have left me flat.

As Humphrey Bogart once said, 'We'll always have indie film.' No, really.

For the mainstream, even Steven Spielberg is sounding the alarm, characterizing this as a time of extraordinary upheaval. Half-a-dozen megabudget flops and the industry will be changed 'forever'.

Thankfully, cable television is stepping into the gap. It's still directed at a domestic market, allowing for more complicated plotting and dialogue.

And the material on offer has never been better.

I can't wait for Game of Thrones to resume.