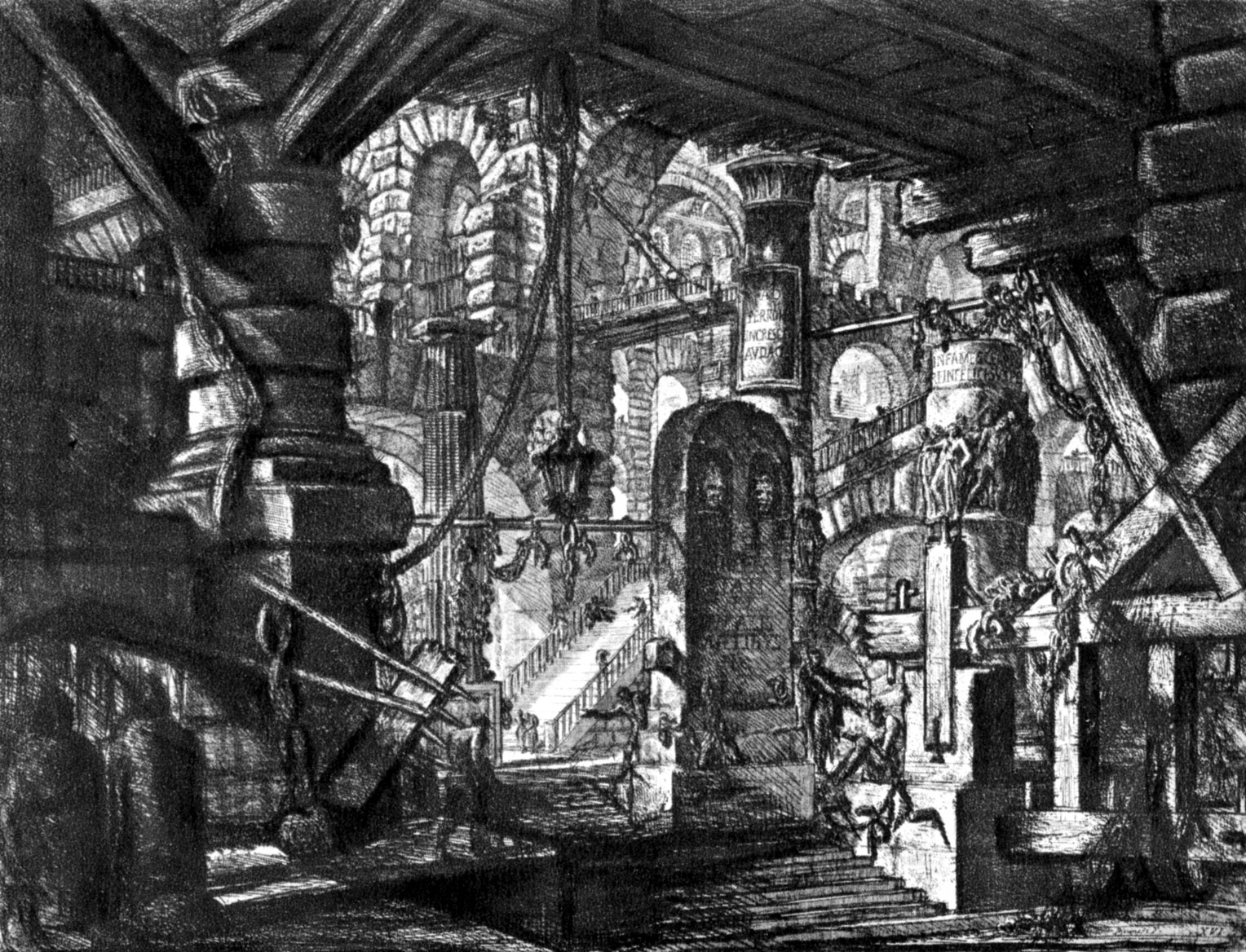 Nobody designs prisons like Giovanni Piranesi. Known for his meticulous etchings of Roman ruins (in which he exaggerates the scale of buildings by a factor of three, the deceptive devil), he surpassed himself with a series of prints of fantastical prison interiors. The Carceri d'Invenzion series consists of 16 prints depicting cyclopean interiors. Soaring vaults, barred windows, gargantuan stone blocks, and torture devices pepper the scenes. The scale itself is oppressive.

There's no sane reason for them to be built in such a manner. It's Gargantuan Aesthetic Dysfunctionalism (GAD) run amok. Just who was being housed in these dark, spacious pits is a mystery. King Kong? Balrogs? You can see the influence of Piranesi on the underground halls of Moria in the Lord of the Rings films.
Just the sort of look you'd want for Hell. The initial pieces I did for the book were even more inspired by Piranesi than the ultimate result. The sensibility he brought to the Prison series permeates Hell Lost, and I would have made the buildings even bigger, and the figures smaller, if I weren't concerned about scaling line weights and how they would hold up when printed. I intend to push farther in volume two.
Totalitarian states are especially fond of architecture that overwhelms the individual with scale, to make people feel insignificant in face of the might and majesty of the state. Hitler, for example, had Speer design a great hall for Berlin so ridiculously massive, rain clouds would have formed within it. Stalin, too, was fond of gargantuan monuments, as was Ramesses II. Colossal architecture: dictators dig it!
Immortality through architecture. Cow the individual and subordinate the citizen. Can't help but think of Ozymandias by Shelley:

I met a traveller from an antique land
Who said: Two vast and trunkless legs of stone
Stand in the desart. Near them, on the sand,
Half sunk, a shattered visage lies, whose frown,
And wrinkled lip, and sneer of cold command,
Tell that its sculptor well those passions read
Which yet survive, stamped on these lifeless things,
The hand that mocked them and the heart that fed:
And on the pedestal these words appear:
"My name is Ozymandias, king of kings:
Look on my works, ye Mighty, and despair!"
Nothing beside remains. Round the decay
Of that colossal wreck, boundless and bare
The lone and level sands stretch far away.

The series of prints was published in 1750. The Inquisition sadly didn't take notice.

Piranesi's designs will remain in the realm of imagination until some mad dictator decides to base his dungeons on them. But you can fly through them. The etchings have been mapped onto 3D geometry, allowing viewers meander through these incredible scenes for the first time, thanks to the Caixa Forum in Madrid.


Check out the animation here.

Emily Allchurch and Nigel Warburton have updated the prisons with modern trappings in a striking series of paintings.

They quote Aldous Huxley, who had this to say:


"Beyond the real, historical prisons of too much tidiness and those where anarchy engenders the hell of physical and moral chaos there lie yet other prisons, no less terrible for being fantastic and unembodied---the metaphysical prisons, whose seat is within the mind, whose walls are made of nightmare and incomprehension, whose chains are anxiety and their racks a sense of personal and even generic guilt."

For more on Piranesi's work, particularly his drawings of Rome (and how the sites appear today) see the comparison photos.
Posted by James Turner at 06:15