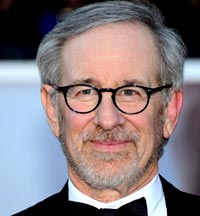 "That's the big danger, and there's eventually going to be an implosion — or a big meltdown… Three or four or maybe even a half-dozen megabudget movies are going to go crashing into the ground, and that's going to change the paradigm."

He says it is already in a state of major upheaval. He had to co-own his own studio to get Lincoln into theaters. Incredible. This is Speilberg!

Definitely worth a read.
Posted by James Turner at 14:00