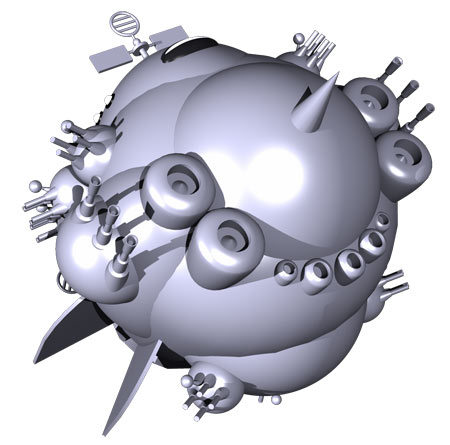 As the cover artist for Amazing Stories and many other pulp magazines, he created candy-coloured universes of honeycomb  landscapes, bulbous space ships, and bizarre creatures that has never left me.

Enormously productive and endlessly inventive, Paul's work influenced concept design in film, television, and comics for decades after.
When I wrote my ode to sci-fi, Warlord of Io (an obvious play on Edgar Rice Burrough's The Warlord of Mars), I was adamant that it should take visual inspiration from Paul.

It took several years of experimenting before I was able to develop a style that fit the Warlord of Io story. That's right: years. It went through half-a-dozen different looks (I didn't work on it all the time).

The result I think of as 'Vector Deco': it uses gradients to define form rather than line, which is hardly evident at all, anywhere in the book (not counting word balloons). It's a drastic change in approach from Nil.

The approach fits with Retro-Future design, with its smooth spheres and sweeping curves. Major relief! I scaled everything down into a cute mini-verse, where life's round and cuddly and slightly impractical. Or hugely impractical, the sine qua non of cinematic concept design.

That's right. You heard me. When it comes to movies, the cool factor is inversely proportional to the design's practicality. Form is at odds with function.
But who cares? The results are better off for it. Imperial Walkers look awesome.

It's about making stuff that looks neat. It doesn't have to actually work. I mean, who wants that, anyway? Much harder to write.

Once I had a look developed for the characters, I plunged into backgrounds and had a blast. But I also needed spaceships, lots of them, for the numerous chase scenes. Nil: A Land Beyond Belief was very flat and graphic, and I took a shot at doing it that way, but discovered I needed depth. I was altering the viewpoint continuously, and the ubiquitous gradients emphasized volume. 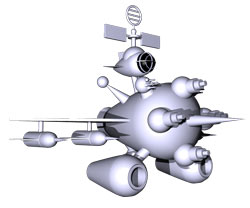 Unfortunately, drawing complicated spacecraft from multiple angles and perspectives would be a grueling and time consuming process, and I was already trying to squeeze a great deal of work into what little free time I had available.

I decided to execute the ships in 3D. Once a design was complete, I could rotate and light it however I needed, reducing the work load and improving the integrity of the ships appearance from shot to shot.
3D programs are tremendously complicated, hurt my brain, and have a long learning curve, so I picked one that is relatively simple and can export vector format files: Swift 3D. It's a good basic program, and easy to get into. My inexperience proved not as much of an obstacle as it might have (Ten-year-olds are far more adept at 3D modelling), as the designs needed to be simple.

In this case, the child like simplicity of the designs worked for me.

Anything too elaborate wouldn't mesh with the mini-verse.
Unfortunately, the vector exports that I thought I'd be able to seamlessly integrate into the panels were not up to scratch: bezier points were placed haphazardly and there were odd artifacts. The shapes just weren't smooth enough. So I changed approach and instead rendered them as bitmaps. Left them untextured, so they had smooth gradients, just like the 2D art work. Again, the designs had to be very simple, too, and consist of basic geometric shapes.

I was happy with how they ultimately meshed together; it isn't as perfect as I'd originally hoped for, true, but screw it. Many mainstream cartoons use 3D elements that are blatantly not hand drawn and stick out far more than my ships do from the surrounding environment. Think of the ballroom scene in Disney's Beauty and the Beast, for example. My ships go with the vector graphics like Elvis and sunglasses by comparison.

Designing the ships was a lot of fun, a chance to play in the realm of pulp sci-fi. I established a number of common elements to unite the look of the ships (hydrogen scoops, antennae, gun batteries, sensor pods), and then set about creating the most impractical and ridiculous designs I could.

Once I started work on Max Zing (for Maximillian Zing, the boy emperor from Warlord of Io), I needed ships in colour. That meant going back to Swift 3D and colouring the vessels. Max Zing was intended to be a 3 panel strip comic, however, and doesn't require changing camera angles.
After some experiments (covering the extreme simplicity of the designs with lighting effects and lens flares), I decided it'd be a lot less bothersome to just do up some simple vector ships from the side and rotate them from shot to shot. The 3D models need more detail and textures to hold up when transferred into full colour anyway.

This is one of the unfortunate things when you experiment: you can lose a lot of time going down a dead end and wind up with nothing but experience and bruises.

The colour tests I threw together wound up not being used in Max Zing, although they may be at some future point.
Warlord of Io was been described as "Rip-Your-Brain-Out-Of-Your-Head-Because-You-Won't-Need-It-Anymore-After-This Awesome!" by Michael May of Robot Six. You can check out the rest of his review here.

Available for sale from SLG Publishing here. Heck, it's on sale for only five bucks right now! The deal of the 25th century, I tell ya. Fire up your jet pack and get on over there for a dose of Retro-Future adventure!