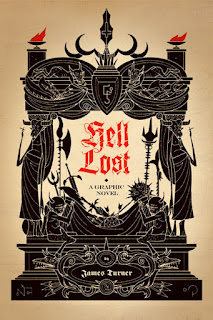 Satan currently is tended to by Boormoth, his obsequious Supreme Secretary and Official Archivist, who controls all his appointments and often interprets Satan's half-conscious, obscene mumblings.

Recently a heretical text called 'The Revolution Betrayed' has appeared, which claims Satan abandoned the noble principles of freedom and self-determination upon which the revolution was founded. Various demons have unjustly been connected to it by Satan, and each destroyed in turn. Some say Satan wrote the thing to discredit his enemies.

Demons survive mostly on the effluvia of human souls, a kind of 'soul dandruff', which is made into bread or used to fertilize the revolting, mana imbued crop fields; souls are also consumed directly. This manner of ingestion is strictly rationed, as it interferes with prescribed punishments. The soul's divine spark remains intact, and is soon excreted in an understandably unpleasant form (ie. shit, from solid to semi-liquid), whereupon regeneration quickly takes place. The experience is said to be highly disconcerting.
Demon Sheppards, professionals who tend The Damned, are confined to their ledge or bolgia, allowing the easier return of souls to their respective punishment zones by Human Resources post-excretion. Senior demons are much more mobile, and are often accompanied by Human Resources staff or freelance bounty hunters who pick up the waste material and see to it being returned to the proper Punishment Zone. 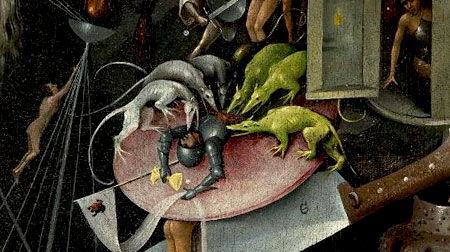 Different sins have different tastes, and many demons have grown fond (or sick) of certain flavours, or even specific individuals. Fast Soul Fry cooks specialize in creating dishes out of The Damned, but dishes must be served immediately, lest the soul regenerate and undo the fine cooking.
Satan himself has grown insatiably fond of traitors, who are akin to fatty comfort food, and has grown vast and obese on a steady diet of them in order to mitigate his melancholy. They have played a big part in expanding his wasteline and permanently wedging him into the ice of the Cocytus, which is now littered with tons of wrappers, cups, plates, pizza crusts, and bones.