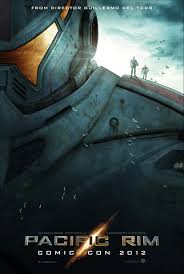 Star Trek: Into Darkness was Wrath of Khan on methamphetamines.

Pacific Rim is Godzilla plastered in hundred dollar bills, from the tip of his steaming nostrils to the end of his armour plated tail.

An American film set in Hong Kong and based on Japanese monster movies, it stars an international cast (Japanese, British, American, Australian, Chinese) and is directed by a Spaniard.

The dialogue is perfunctory, and much of it was unintelligible due to poor sound quality. But are you really missing much?

Characters are over the top and drawn with broad brush strokes. One seems defined by his bow tie and mutton chops. There's not a lot of room for them, but there's an awful lot of punching.

The actors include Charlie Hunnam, who does a decent job as your typical, square jawed lead, and Idris Elba who brings his usual gravitas. Rinko Kikuchi deploys a devastating demure gaze. Caricatures make up the rest of the cast, as they did in the giant monster movies of old.
Obviously, the real stars are the monsters (Kaiju) and the giant robots (Jagers).

The props are impressive, and the design work impeccable. It has the feel of a real, lived in world, albeit one where the Laws of Physics have been beaten near to death.

It's fun, and if I were ten I'd have absolutely loved it. Unfortunately, I am no longer as enamored by giant robots pummeling gargantuan monsters for ten minutes at a time as I once was.

And this film has a lot of punching in it.

Did I mention the punching? Granted, that's a feature for many, but it went over my tolerance level and drove me into boredom. Just too much of a good thing. Because it's well done punching.

I must be getting old.

The fights are almost all shot in rain or underwater (They seem to forget they're underwater at times), making the effects work easier. Godzilla did that trick a decade ago. 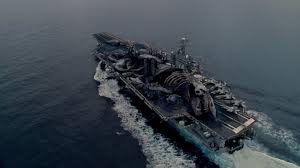 For some reason I keep mentioning that big green lizard guy.

Unfortunately chaotic camera work makes it feel like Godzilla crashed The Bourne Identity and stepped on poor Jason. Shaky-cam vérité on an epic scale. It works for the most part, but I found it hard to understand what was going on as big, rain soaked and unidentifiable monster or robot parts flew by.
The giant robots were suitably magnificent, and much easier to interpret onscreen than their Transformer peers. Del Toro kept their surfaces much cleaner. Transformer bots look like massive jumbles of indecipherable machinery packed into a dense mass.

A rule of thumb I remember being put forward by an ILM alum is that the audience should be able to 'read' a shape within three seconds of it appearing onscreen. If it's more complex than that, you're going to confuse a lot of eyeballs.

The monsters had extra legs and arms and weird blue goo oozing nematocysts sticking out all over and didn't always fare as well on my retina, but the fundamental aesthetic of them was intriguing. Ace fantasy-anatomy artist Wayne Barlowe was behind many, and his genius shines through.

You can tell Guillermo Del Toro loves the whole giant monster genre, and he pours his enthusiasm into every frame. This is no hack job, but a real tribute. There are some wonderful touches and details to be found in the film. Far superior to the Transformer franchise. Just not quite my cup of tea these days.

Little boys will love it. Probably be video games and toys to follow.

They have a 200 million dollar budget to recover!
Posted by James Turner at 06:19