These are all from the first run of the show, in an earlier millennium, when it was shot in a closet on a shoe-string budget. The writers weaved wonderful tales for kids, and the actors sold them with great (periodic) gravitas. They could make you believe bubble wrap was a deadly threat... but then, little kids are rather forgiving of this sort of imaginative play. I view all these with thick nostalgia goggles, and as great as I think they are, times have changed. TV and film have about ten times as many cuts now as they used to. The Deadly Assassin is very tightly paced, but some of the other episodes are heavily padded. 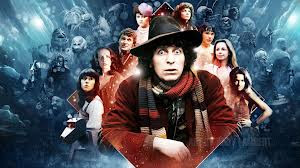 1) Genesis of the Daleks

The Doctor, Sarah, and Harry are dispatched into the past to prevent the creation of the hateful pepperpots. Terry Nation's masterpiece, he gleefully rewrites the history of his most famous monster while exploring issues of morality in times of conflict.

Set on the ravaged husk of Skaro, where a thousand year war between two cities walking distance apart has wiped out the rest of the planet. In the underground bunker of the Kaled Elite (aka Space Nazis), The Doctor tries mightily to throttle the Dalek baby in its crib, but finds his own conscience the greatest obstacle.

Davros, their creator, is the piece de resistance here, superbly played by Michael Wisher, who owns the role like no other. The definition of a power mad scientist, his charisma (if a blind, wizened, green skinned prune can have charisma) makes him persuasive and unique. His confrontations with The Doctor crackle with energy.

The tone is dark, but Baker throws about witticisms and bon mots like hand grenades, detonating the tension and reinvigorating the drama but never breaking the suspension of disbelief. That's handled by the giant clam creatures.

The Doctor and Sarah Jane arrive at a British mansion where the antiquities collection is on a killing spree. Features the best villain in Who history: Sutekh The Destroyer, an alien mistaken for a God (bet that happens all the time), voiced by Gabriel Woolf. The actor's choice to go silky smooth instead of blustery or grating makes him all the more menacing, elevating his villain from the pack in the same way Wisher super charged Davros by flitting from one end of the vocal spectrum to the other.

Sarah Jane shines, and the interaction between The Doc and Sutekh is right up there with his confrontations with Davros. Tom Baker adds his usual irreverent witticisms to the mixture of sci-fi and horror and the whole thing proceeds at a relentless pace. To top it off, the mummies lumber in a way easily imitated by ten year olds.

Peter Davidson's swan song is also the last decent serial of the original series. I won't even attempt to describe the plot. It's got something to do with mercenaries, drugs, androids, and revenge. Just watch it. The villain Morgus (John Normington) is a lying, deceitful, manipulative prick of epic proportions.

Because the other kind gets less work. The Doctor, framed for murder of The President of Gallifrey (his timey-wimey home world), must go into a virtual reality to prove his innocence. It's The Matrix, only twenty-five years early. Also the first exploration of Time Lord society, which is suspiciously class based and oh-so-British.

Alternately horrific or hilarious, it received complaints at the time from Amy Whitehouse, which put an end to The Doctor's 'darker' period and left the show emasculated. For shame, Miss Whitehouse.

5) The Robots of Death

The Doctor and Leela arrive aboard Storm Mine 4, a giant Sandminer, and are caught up in a murder mystery--with them as prime suspects. Who could see that coming? Agatha Christie meets Robopocalypse. Splendid. The sytlized design of the robots, vaguely terracotaa warrior, is another masterstroke by the costume and prop team.

Leela rocks as the savage warrior, a particularly violent but lovely fish (barracuda?) out of water. One of my favourite companions, wishy-washy pacifist types can't handle her cut-throat approach to man-eating monsters ("Shall I kill it, Doctor? Shall I?"). She is awesome. Makes 'Rose' look like a piece of plastic driftwood.

A leisurely paced adventure set on a mysterious space station infested with green painted bubble wrap pupae, it borders at times on hard sci-fi. The sets are superb, the acting excellent, but the alien Wirrn design leaves something to be desired. This is one menace that can be walked leisurely away from, with time to tie your shoe and have a smoke. Admittedly scary when I was a child, and didn't know bubble wrap was (mostly) harmless.

Shakespeare meets Who. Or is it Machiavelli? BBC period drama skillZ are harnessed to create genre goodness. Imagine Hamlet being invaded by an aliens mid-play. Just what that it needed, too. Written by Louis Marks, it bears the imprint of editor Robert Holmes, who was endlessly fond of mixing alien threat and historic setting.

A seed pod falls from space, and The Doctor and Sarah Jane must stop it from germinating and taking over the world for Vegetable Kind. The Thing, essentially, only on steroids. Well. High quality fertilizer? Bit Day of the Triffids, too. Long but wonderful, the bit players (Chase and Scorby in particular) are fun and full of personality.

The Doctor's showdown with a bureaucrat is one of the funniest in the show's history, but the horror of the Krynoid is never undermined. Even the effects work is above parr for Who.

A crash landed alien potato head reaches out from medieval times into the future for scientists to help repair his ship, attracting the attention of UNIT and The Doctor. Introduces both intrepid reporter / revolutionary agitator Sarah Jane Smith and the time travelling Sontarans, worthy adversaries of The Doctor.

Actor David Lindsay's performance is something to behold: buried beneath a domed helmet and a potato head prosthetic, he brings real menace and alien mannerisms to the Sontaran Linx. It's an instantly iconic performance that ensures their return. His interactions with the would-be warlord Irongron, played by David Daker, are hilarious but work wonderfully in context, as medieval and space-borne militarist cultures clash.

The rebooted series turns the Sontarans into a plastic imitation, buffoonish caricatures, more Colonel Blimp than alien menace. Pathetic. Without Lindsay, Sontarans are good for comedic relief and little else.

Sarrah Jane is more than a meddling reporter: the first thing she does after being thrown back in time is start organizing a peasant rebellion. She does the same thing on Skaro in Genesis of the Daleks. That's my Sarah Jane! You can't take her anywhere without her stirring shit up. Her next brightest moments are seen in Pyramids of Mars, where she proves quite the marksman. Makes 'Rose' look like a Barbie Doll with a speech impediment. Sarah has more brains and depth by far. Think Marianas Trench vs. street puddle.

Plenty of location shooting around English castles adds atmosphere and a bigger budget feel to the proceedings.

10) The Talons of Weng-Chiang

The Doctor and Leela arrive in Victorian London only to find murder afoot (when is murder not afoot in London?): women are disappearing and gigantic rats roam the sewers. I would rate this one higher except for the casting. When I was little, I didn't realize it, but the main Chinese character, Li H'sen Chang, is actually played by a white guy (John Bennett). He does a great job, but still. TVOntario wouldn't rebroadcast it due to racist content. Yikes.

On the other hand, some of the best dialogue in Who history resides in this six part, flawed gem. Robert Holmes at his best. Professor Litefoot and theatre owner Henry Gordon Jago are inspired creations, and Litefoot's interactions with Leela, trying to explain the concept of tea time, are sublime. Phantom of the Opera meets Time Cop. Baker decked out as Sherlock Holmes is the cherry on top.

But don't look at the giant rat too closely, it's someone's a fur coat with whiskers sewn on. Pretty sure.

11) Terror of the Zygons

Fantastic costumes, quirky Scotsmen, and great atmosphere make this superlative. The only downside is the Loch Ness Monster, which is a hand puppet. Probably made out of a sock. Well, so what. These are things we overlooked in the Old Times, when we walked uphill both ways. Spoiled Youngling audiences may not be so generous.

One of the last great UNIT family stories.

On a side note, Zygons would be a real hit at cocktail parties. Disguising themselves as one person or another, they could really mess with heads. Think about it.

Had to include it in the top ten. So what if it makes the top ten eleven. Douglas Adams wrote a five part trilogy.

Honorable mentions: Enlightenment, City of Death, The Dalek Invasion of Earth, The War Games, Planet of the Spiders, Robot, The Hand of Fear, Horror of Fang Rock, Warrior's Gate, The Visitation, Black Orchid, and The Awakening.
Posted by James Turner at 18:06