The New Yorker Art Editor Francoise Mouly joined Frank Viva and Anita Kunz to discuss the magic behind the famous images that grace the cover.

Mouly explained, in a wonderfully chi chi french accent, that it's all about dialogue. It's a general interest magazine, too, so all manner of topics can be covered. If they want to do cooking, they can; but they can also do golf and politics. Weee!

In 1993 Tina Brown sought to revive the dying New Yorker magazine. She brought in artists like Ed Sorrell and Art Spiegelman (Mouly's husband) to inject some life into it.

One of the first and most controversial covers was by Spiegelman, who depicted a Hasidic Jew kissing an African American woman in a style evocative of Marc Chagall. It caused an instant firestorm. A hundred thousand subscribers fled, but even more joined. The goal? 'Lower the reading age down from eighty-three and a half... to eighty-two and a half.'
A series of reinterpretations of the cover's dandy, Eustace Tilley (A satire of New York dandies by Rea Irvin, culled from an Encyclopedia Britannica illustration of the term), followed. Chris Ware did a sequential version, in his breathtaking crisp, clean style.

Most artists make regular submissions of ideas. Mouly tells them to 'think of her as their priest.' Feel free to show me anything. Don't self-censor. Let the creative mind roam free.
She believes that with a very simple idea and a pen, an artist can have an impact on the world. Even change it. She understands and accepts the need for visual shorthand, although the use of 'stereotypes' (having once employing a piece of Arab head gear on a boy jumping on a sand mockup of the World Trade Centre) got her denounced by Noam Chomsky. She strives to keep things nuanced, to avoid the easy didactic drum beat of the political cartoon. These are more sophisticated, nuanced. Oversimplification a no-no.

Some covers are over analyzed for meaning. Frank Viva described a piece where he placed a white figure over a black background and a black pigeon over white background. People wondered about hidden meaning, racial subtext, but he often changes colours to fit the composition, and there was no hidden meaning. He just wanted the elements to pop forward.

Mouly had to come up with the famous 9/11 cover within 24 hours. After retrieving her children, who were in school right by the Trade Centre, the last thing on her mind was the magazine cover. 'Everybody was lost, and so was I.' An outraged and worried friend told her to do no cover. That's where it started. Art Spiegelman suggested a black on black silhouette. Instantly, she knew: that was it. The perfect statement. No subtitle, no explanation. Exactly what was needed. But it would have to be subtle. Would it work on a web press? It did, and joined the list of other legendary New Yorker covers.

Artists submit to her constantly: ideas, sketches, doodles, thoughts. Most don't wind up on the cover, but you can get a glimpse behind the curtain at her hit blog: Blown Covers. 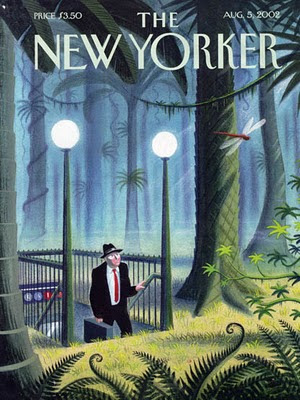