TCAF 2013: Judge a Book by its Cover: Designing Comics Outside of the Panels 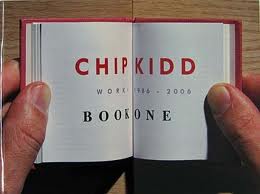 A great panel moderated by John Green and featuring Chip Kidd, Matt Kindt, Fawn Lau, and Tom Devlin. They talk about fonts, logos, trim sizes, spot gloss, interior layout, and other elements of design. I'd swear the awesome Jim Rugg was up there too, but I might have been hallucinating. I'm a very unreliable narrator.

Although all the panelists are focused on print, discussion touched repeatedly on the wave of the future: digital comics. Everyone was curious what they thought. Kidd hasn't done them; none of the artists he works with want to see their books that way. Yet. And if Knopf does leap into digital, it'd have to be for all formats, including the Kindle; and currently, that's a deal breaker. Kidd himself "doesn't want to make design that can be turned off with a switch."

But all admire the digital comic done by Chris Ware, Touch Sensitive. It shows what can be done when it's done right.

In terms of trends, Kidd says that, "Ugly is really big now... There's great work, so sincerity not snark. SPX, MOCCA, TCAF." He's especially fond of design from the forties and fifties, when there was a clear break between type and image, and hates complicated logos on complicated images. It becomes visual noise, and he's all about legibility. Which puts him at odds with some of the work being done now.
Jim Rugg mentioned that Russian artist Uno Moralez has caught his eye, and Tom Devlin's a fan of Oliver East's Sweardown and the publisher Secret Acres.

Kidd is well known for his book, Batman: Death by Design. It took him a summer to write his Batman story, and Dave Taylor three years to draw. Taylor spent a good deal of time doing research for the visuals. For example, what would 1930's Bat Computer look like? An interesting question. The result below:

In future, Chip would love to work with Ivan Brunetti, but first he's got a book coming out that will teach graphic design to kids. Get them while they're young, as they say. Kill bad design in the crib, as it were.

All believe that layouts should be worked out first on paper, before hitting the computer, and one should try everything. 'Try stupid things' is another way of saying, 'take risks', says Kidd. It fits well with the philosophy of Mouly.

For inspiration, Tom looks at graphic books and does the opposite. You have to create your own trends. In the end, he says, "If they touch the book, I've won some battle."

Devlin, a thirty five year veteran of the field, often stands behind his designs, literally, at conventions, where his work will be spread across table tops. At one, Devlin had a couple walk up and pick up a book he'd designed. "That's what I want," she declared. Devlin swelled with pride. Then she continued, "That's the colour I want to paint the kitchen." Then she put down the book and they walked away.

Typography sticklers one and all, they're united in their hatred of the font Comic Sans. Devlin even suggests practicing lettering while watching TV, and hates seeing words butt up against the panel edge.

They don't test their covers with focus groups. "The only good thing about the money in publishing is that we don't have any to do focus groups and testing," says Kidd. Tom believes that the more comments he gets, the worse the design gets. It goes south as everyone has to add something. "If they don't say something, they'll be fired," jokes Kidd. Everyone feels they have to contribute in order to justify their salary, leading to a deluge of contradictory feedback and pointless alterations.
All would love to use environmentally friendly materials, but the cost is often four times greater, making it prohibitively expensive.

The sweet price point for a graphic novel? $19.99. Kim Thompson of Fantagraphics has mocked D&Q for pricing everything at $20.00, but Devlin says that prices over twenty bucks cause sales to drop dramatically. A Daniel Clowes book can command $25, thanks to name power. Kids books have to be cheap, on the other hand. You can't do a $30 one.

Something to keep in mind.
Posted by James Turner at 11:26