Kick-Ass 2: Threat or Danger to Civilization?

"Kick-Ass 2: Unpleasantness at its worst," blares The Globe and Mail's Adam Nayman. "It’s a big story that Jim Carrey withdrew his support for Kick-Ass 2 based on its violent content. One wonders if the actor – whose role in the sequel as a star-spangled sociopath is really just an extended cameo – was ready to stand behind the scene where high school girls projectile vomit after being zapped with cattle prods. Or the one where a super-villain comes up short in his attempt to rape his nemesis’s lover due to a case of erectile dysfunction."

New York Post critic Kyle Smith writes, "Twenty-five years ago a film like this would have inspired sober op-eds and congressional hearings. Today we realize the fall of the Republic is not going to ensue, but that doesn't mean the movie's frantic lunges at the inappropriate don't become tiresome at times."

Moviefone's Sandie Angula Chen claims "the extreme violence and that one sexual assault joke are inexcusable."

'One of the stupidest sequels ever, ' adds Susan Granger of SSG Syndicate.

Obviously this film has ruffled the feathers of critics; it currently averages 28% on Rotten Tomatoes.

Yet I enjoyed it.

Am I  a tasteless, uneducated, plebeian boor too unsophisticated to know I should be in a state of perpetual, sanctimonious outrage?

Make no mistake: Kick Ass 2 does aim to provoke, shock, and transgress. It's excessive and far from perfect. But inexcusable? Unpleasantness at its worst? Stupidest sequel ever?

Is the film in poor taste? Frequently.

Some of the opprobrium directed at Kick-Ass 2 may be out of fear that it will inspire copycats in the real world. That I can understand, and it seems to have been Jim Carey's concern. The film will mostly be watched after theatrical release on DVD by male teens too young to get in the theatre.

It's R-rated, and appropriately so.

Yet Kick-Ass 2 has more heart than the by-the-numbers Wolverine or Man of Steel, more emotional resonance than the ponderous, turgid Pacific Rim, isn't as clunky as the earnestly didactic call to class war Elysium, and makes more sense than the senseless Star Trek: Into Darkness. Those films all felt like they were churned off the same studio assembly line, just painted in different colours.

Action in the Kick-Ass franchise proceeds from character, as it should. Some blockbusters forget this. It's not always easy to do. Remember Prometheus.

Dave (also known as Kick-Ass) is secondary this time around; the real standout is Mindy (Hit Girl). Dave's eager to get back out and play superhero. Mindy, on the other hand, really is one, but struggles not to be. She tries to fit in, to be normal. She isn't: she's superlative. It makes her one of the more compelling female characters this year.

These two kids, in spite of everything around them, seem more like actual people than anyone in Wolverine.

Dave, for example, behaves abysmally towards his own father, exhibiting selfishness that gives him greater depth and horrible regrets. But he comes across as a teenager, not a demigod. 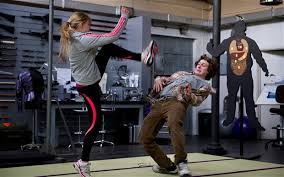 Even the villain is, comparatively, well rounded. Chris, The Mother•cough•, is the pathetic, wimpy antagonist who aspires to be a super villain and is entirely unequal to the task. His desire to be bad-ass is well founded and motivated: he's out to avenge the death of his dad at the hands of the hero. Frustrated by his own inadequacies he proceeds anyway, out of sheer determination, anger, stupidity, and narcissism.

In a drama, his inadequacy as a villain would be a flaw. Here, it's a feature. He's a more interesting villain than, say, General ZZZZod or that inconsistent guy whats-his-face in Wolverine.

Anyone actually find ol' Zod compelling? And I'm not talking about Terrence Stamp. In Man of Steel Zod's a cardboard cutout, there to punch and be punched, so constrained by movie structure that he couldn't do anything unexpected or even interesting. At one point I thought he was on the verge of doing something different, of breaking the mold, before sinking back into the same old, same old.

The villain in Wolverine is so forgettable I don't remember his name. He didn't have a single memorable line. Chris 'The Mother*cough*'? He's got several, including a great one: 'Like an evil Jesus.' That got a laugh out of me.

Going to Hell, yeah, I know.

The highly controversial rape joke emphasizes how inadequate Chris is as a super villain. It fits with his character. His imprisoned uncle calls him 'special', and not in a flattering way. He tries to box and gets his ass whupped. Ultimately he realizes his superpower is being super rich, so he sets about buying his way to infamy.

Chris is the flip side of the flawed, wannabe heroes. All these people are striving to be something they are not. Except Hit Girl. She's the real deal, the only one who is, at heart, a superhero, and the only one trying hard not to be.

Adam Graham of Detroit News claims "Kick-Ass 2 is and joyless exercise in brutality dressed up as a Comic-Con fever dream... How’s this for fun: In one scene, 10 police officers are brutally murdered on a suburban street in broad daylight by a costumed villain known as Mother Russia. Each is disposed of in an increasingly intricate way, capping off with a pair of cops being chopped to death by a lawnmower that smashes through the front windshield of their vehicle."

And what about Game of Thrones, one of the top shows on television?

A character is tortured for an entire season in one of the most prolonged examples of on screen sadism and torture ever filmed. It culminates in the victim's member being lopped off, which segues to a scene in which his tormentor eats a sausage before him, hinting that that's no sausage.

A sadist forces a prostitute to torture her peer. With growing horror, she's forced to escalate from spanking the girl to striking her with a horned implement (and worse); she's later killed by the same sadist, slowly, with a dozen carefully placed crossbow bolts while she's tied to a bed.

A fellow has a hand cut off and then hung around his neck to torment him. He's then given piss to drink.

A father has sex with dozens of his own female children, who give birth to further inbred, grandchildren; he gives the boys away to monsters for likely unspeakable purposes.

A young girl brutally stabs an adult in the neck repeatedly with a knife.

Kick Ass 2, ''the year's most unpleasant movie,' pales by comparison.

And what about Boardwalk Empire? Or the neck-snapping sex scenes in True Blood?

Or STARZ's Spartacus: Blood and Sand?

How about some choice Spartacus dialogue:

"A gladiator does not fear death, he embraces it, he caresses it, he fucks it. Each time he enters the arena he slips his cock in the mouth of the beast, and prays to thrust home before the jaws snap shut."

"Tit size and cunt all appear to be without disease or deformity, which tells me the fault is not in the flesh but in the bitch."

"The gods have seen it fit yet again to spread cheeks and jam cock in ass."

And I'm supposed to get worked up over Kick-Ass 2? Seriously?

KA2 will not appeal to everyone, not by a long shot, but if you enjoyed the first film, you'll likely dig the second. I did. And I'd rate it higher in entertainment value than the majority of this summer's blockbusters.

No, it's not politically correct. Very much the opposite. And it does indulge in gratuitous violence.

Chloe Grace Moretz was excellent in the first film but I'd be hesitant to let her watch it at the time.

It's an adult film that pushes buttons and which, ultimately, will be mostly viewed by male teens on DVD.

But that doesn't mean it's an abomination. The kids are already watching cable.