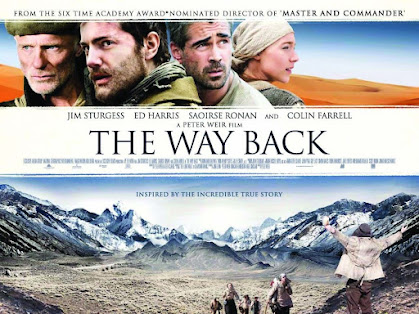 I had never heard about The Way Back until I saw it on Netflix. It’s Peter Weir’s last film, starring Jim Sturgess, Ed Harris and Colin Farrell, and (apparently) was a failure at the box office. Which is a shame, because it’s very well done, and Weir’s a fabulous film maker. The Year of Living Dangerously, Witness, Gallipoli, Dead Poets Society, The Truman Show and Fearless are all modern classics.
From a certain point of view, The Way Back is a horror film.
But instead of someone in a hockey mask jumping out from behind a tree with a machete, you have the Soviet Gulag Archipelago and 4,000 harrowing miles of rugged, inhospitable landscape between the characters and freedom.
Based loosely on the memoir of former Polish prisoner of war Slawomir Rawicz, our heroes are a rag tag group of Eastern Europeans, plus (oddly) an American. The Latvians and Poles were screwed over by the Molotov-Ribbentrop pact between the Nazis and the Soviets in 1939. The American fell victim to idealism. Now they must pass across frozen wastes and scorching hot deserts, with little food or water, all the while in mortal fear that they will be apprehended by the authorities.
That’s scary.
Millions toiled away in 30,000 camps in the Archipelago at it's height, all disposable slave labourers, powering the Soviet Union's resource extraction and economy. One Day in the Life of Ivan Denisovich is a compelling account of life in a Soviet labour camp in the 1950s, if you're looking to dive deeper. Some 1.6 million perished in the gulag system, although reliable numbers are difficult to come by.
Doubts have been raised about how true Rawicz’s tale is as well, but numerous stories of people escaping Siberia have floated around for some time. A British officer, Captain Rupert Mayne, interviewed three men who claimed to have escaped from Siberia in 1942. The BBC did an investigation and came across a man named Witold Glinski who claims to have made the same walk. So who knows?
The ending, the very ending, is what got me. It ties in beautifully to the beginning. It's speaks to the power  and perseverance of the individual in the face of towering, implacable institutional inhumanity.
There is no need monsters in this world, not really: we have people.
I am so glad I did not live in The Bloodlands (although I recommend the book), where people had a choice between two murderous tyrants. What is more 1984? Between Stalin and Hitler, over 30 million people lost their lives. 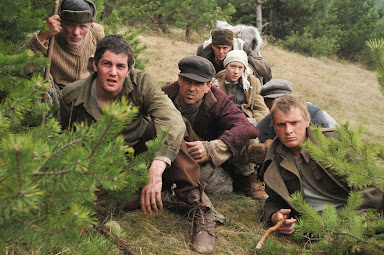 Conventionally speaking, The Way Back is an survival film with an underlying anti-communist angle. It was a bit of a slog for my goldfish short attention span; it’s a very, very long trek to India. And yet, the ending would not work if the film did not feel long; it adds to the emotional impact.
Definitely worth a watch if you have the time. It deserves more attention than it got on release. At the same time, I found the picture deeply upsetting. Which, I suppose, is a sign that it is very well done. Movies are emotion generation machines, after all.
In the BBC article, Weir said, ""It's about the struggle that all of us have to survive every day. This is on an epic scale, but survival is at the heart of it, and what keeps you going with all the difficulties and pain of life and the bad luck."
Amen to that.
And may God (or the universe, if you prefer) bless.
Posted by James Turner at 14:02