It's been years and years since I did the Map of Humanity, a madly ambitious attempt to map out the human experience along the lines of superego, ego and id.

That was followed up by the Map of Relationships, which ran in Walrus magazine way back in the day.

Now I've finally had motivation to do another map.

Because this was the year our interconnected, global reality contracted to the size of our domiciles, when we became exiles in our own homes, and going to the grocery store became a dangerous expedition for toilet paper.

Passing within six feet of a stranger was a mortal danger, and 'Here be Dragons' was the end of the block.

Sure, some of that is hyperbole, but the underlying, emotionally discombobulating nature of the COVID-19 pandemic was very real.

I have been lucky enough to remain employed throughout this bizarre experience, and while life has continued in endlessly bland and unremarkable ways, there's this noise at the edge of perception, of lockdowns and death rates that then percolates in the imagination.

Anyway, this map is the product of the lockdown. It's intended with tongue planted firmly in cheek.

I hope you enjoy it as much as I did making it.

The map references numerous favourites, from Pilgrim's Progress to the famed Peutinger Map (look at the figure for home and you will see a resemblance to the icon for that legendary city at the hub of 100,000 KM of ancient roads).

(Note that the map's font is archaic, and uses the letter F where there are two s's.) 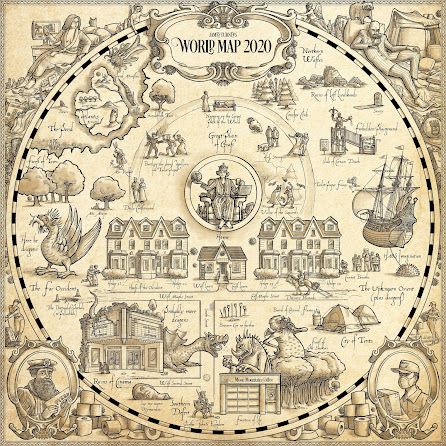 I made the map in ProCreate, then brought it into an older version of Adobe Photoshop to add the text. I played around with adding colour, as many maps of this period would have been hand painted (light washes of watercolour over the print), but it seemed like enough work as it was, and I rather like the unity the tint brings to it all.

The very first Map of Humanity was in this style, as an intaglio print (with acid washes for tone). That one had severely curtailed scope, as my ability to write backward is quite limited.

This piece is the spirtual successor, executed decades later as lines of light on an iPad.