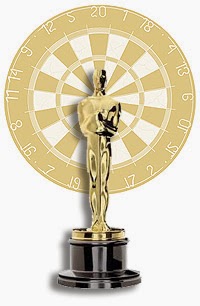 It's that time of year again. The Oscars! Didn't do very well with my predictions last year, but that won't stop me. I've dragged out the dart board again. We'll see how closely my opinion (and aim) mirrors The Academy this go around.

12 Years a Slave and Gravity are the must see pictures of the year, and they will likely sweep the major categories. Gravity in particular simply must be experienced in the theatre, in IMAX and 3D if possible, to get the full effect. It's more of a roller coaster ride than movie. This is the only film I'd say that about in the last 10 years, which makes it quite an achievement.

Best Picture:
12 Years a Slave
Hands down. It's that good. I was immersed the whole run time, only taken out of the story briefly when Brad Pitt showed up. His support was important to completing the project though.

Best Actor
Chiwetel Ejiofor
Probably will go to Matthew Mcconaughey. He did a good job with Dallas.

Supporting Actor
Michael Fassbender
12 Years a Slave
or
Jared Leto
Dallas Buyers Club
Both were very good; I don't want Fassbender to win because he was so odious, but then, that's a testament to how good his performance was.

Animated Feature
Despicable Me 2 (my fav, but probably go to Frozen)

Dcoumentary Feature
The Act of Killing
Didn't see it, but sounds heavy.

Documentary Short Subject
The Lady in Number 6: Music Saved My Life
Like the title and the sentiment. Didn't see any of them.

Music Song
The Moon Song from Her
Honestly, I thought the songs in Frozen were less than compelling. But my tastes are primitive. I liked the Lego song 'Everything is Awesome', after all.