The Day of the Doctor Review (SPOILERS) 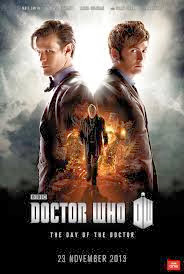 Fun. Enormously clever fun, worthy of an anniversary. Great lines for all the major players, including 'Rose'. The Zygon threat is a bit perfunctory, but that's a quibble. There's lots going on here, mostly about The Doctor and his choice to end the time war (which is echoed in the Zygon subplot).

It's all about choice, baby!

The episode starts with a scene of what passes for domestic bliss in the TARDIS between The Doc and Clara, planning a vacation romp together, but quickly segues to The National Gallery in London, complete with the a bit of Harold Lloyd style comedy schtick along the way, where trouble is brewing. It works, it fits, it's fun.

A freaky creepy otherworldly threat (this is Doctor Who) is presented in the form of devilish but unidentified creatures that have escaped from paintings, which were serving as stasis prisons. Clever idea, nicely realized, and tied in to the ultimate conclusion.

Moffat is laying his trail of breadcrumbs with aplomb here, and for once I think he's set just the right number. Not so many you feel buried in foreshadowing, but enough  that the ending makes perfect sense. At least as much sense as an episode about a man who travels in a police box, one that's bigger on the inside to boot, through time and space can make sense.

John Hurt is delightful as the missing doctor and he gets some great comebacks to throw at his bickering, older yet younger selves. The banter is bang on. Not vicious or mean spirited, but playful and witty. Just what is needed, and it flows naturally, like bullets. It's not stilted or forced, which can sometimes be the case with Moffat.

Tenant and Smith are roped in to John Hurt's apocalyptic mission by the sentient interface of the powerful doomsday weapon, which choses the visage of Rose Tyler to represent its conscience. I'd have gone with Donna, but it's a doomsday weapon, so what can you expect. In so doing, she/it actually allows the Doctor to transcend the moral hell he had cast himself into the first time around.

There's much fez tossing and running around throughout, mostly played for laughs, but not so broadly as to become completely farcical. There's still a hint of drama, and the pace is relentless. The episode never drags, the dialogue never grates. Tenant kissing a giant sucker covered fetus disguised as the Queen of England is another highlight.

When the Doctors figure out a way to escape from their dank prison in the Tower of London, it's not only a clever solution, but it too figures in the climax. It reminds me of City of Death, and that movie with Dennis Quaid about a radio that can talk to the past.

The comedy cherry on top here is that after coming up with this fabulous solution, Clara just walks in on them. The door wasn't even locked. Brilliant. Funny but not stupidly so, for Queen Elizabeth has plans for her dear Doctor and husband.


The Daleks figure only peripherally. Nothing wrong with that. They orbit the narrative, beyond the edge of the screen, driving the Doctor to his seemingly inevitable, terrible decision.

The moral dilemma the show posits is put forward quite bluntly: is it just to sacrifice millions to save billions? Is it even a real choice? The humans are posed the same dilemma, albeit on a smaller scale, byt the Zygon invasion.

Rather than running or turning away in shame at the horror of it, all three Doctors join together, as one. Hurt does not have to face the burden of genocide alone. But wait! There's another switch and a sharp injection of hope: having decided to bring an end to their own people, Matt Smith has a spark of inspiration (helped along by 'Rose').

And so a new plan is born, one which creates a wonderful excuse to throw all the Doctors fleetingly together. Not just Matt Smith, Tenant and Hurt, but all the classic Doctors, plus Eccleston. They're only seen on monitors, blurred, briefly, but its yet another fun 50th nod. Having the lot prancing about the stage would have been a Herculean challenge to manage narratively. This is more than enough. But it gets better.

After the danger is passed and Gallifrey has been (possibly) saved, we have the final cherry on top: Tom Baker strides on stage to exchange a few words with his young ward. Baker is his usual irreverent self, and it's a pleasure to see him in the role once again. Always been my favourite.

The show ends with the Doctor set on a new mission, this time one of hope rather than despair and destruction, in search of his home planet, Gallifrey, now lost, rather than destroyed.

It's a fun switch, and well handled. Bringing Gallifrey back immediately would have been too easy. This will give the show narrative thrust for seasons to come, and a purpose to his new adventures.

May you have another fifty.

The review at The Guardian is entertaining.

And if you're looking for a ranking of the ten best classic episodes, here's my take. Just to be controversial, a ranking of doctors by ability. An overview of the show can be found here.