Comixology has Rebel Angels #4, the satirical graphic novel by James Turner, available for purchase now, for just 99 cents. An amazing deal, I assure you. But that's what you expect from the good folks at Comixology.

The blurb: "Lightbringer Nolous whips the demon hordes into a frenzy and has Balthazar presented with a gift that sets battle into motion. Alecta Fury leads an aerial counter-charge against Balthazar, setting two mighty infernal armies on a deadly collision course from which only one can survive. In the chaos below, Ich's true identity is revealed."

Sound mind blowing? Like the excitement of Christmas on crack? Better than syrup slathered blueberry pancakes and maple smoked bacon accompanied by a hot steaming cup of fine java?

You bet it is.

Find out if Hell really is other people in this instant classic that isn't a Hellboy graphic novel, but does feature demons that might be related on the maternal side to everyone's favourite hornless hard ass.

One day next spring it will be available at your local comic book shop. 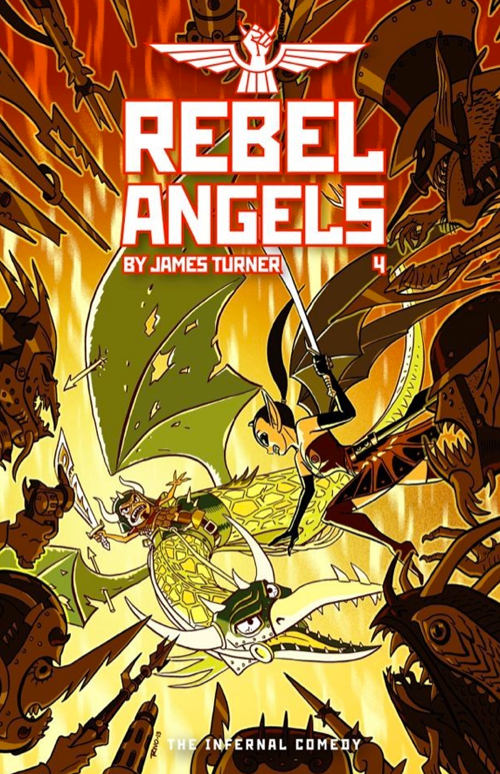 The wonderful cover (above) for issue four, depicting Balthazar and Alecta Fury going toe to toe, was done by the talented Paul Rivoche, who's worked for just about everyone who is anyone, including DC Comics, WB Animation, and Adhouse books.

Now I've snagged his genius for an issue of Rebel Angels. Hurrah!
Posted by James Turner at 10:46