Jodorowsky's Dune: "You can't make a masterpiece without madness." 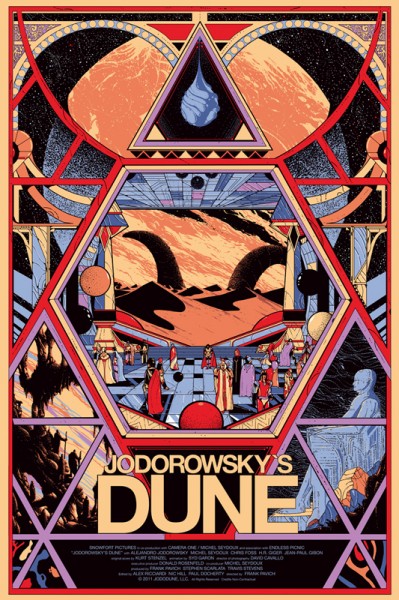 So says Jodorowsky, the infectiously enthusiastic focus of the new documentary, Jodorowsky's Dune.

He and his vision were at the heart of a quixotic 1970's effort to produce Frank Herbert's labyrinthine novel. Supported by an elite team of 'spiritual warriors' that Jodorowsky assembled, they'd create an epic without ever reading the source material.

Jodorowsky has the kind of irrepressible passion and sense of wonder needed to sell a crazy project to Hollywood. Think Reading Rainbow but with everyone on LSD. This is a man who can present a series of static storyboards in such an enthralling way you feel like you've seen the film.

No wonder he was able to put together such a talented crew.

And what a team it was: he brought together leading artists such as Moebius, Dan O'Bannon (pre-Alien), H.R. Giger (also pre-Alien), and Chris Foss. He's got taste.


That being said, I am dubious about the choice of Dali to play the Padashah Emperor. But who knows? If anyone was going to get a great performance out of Dali, it was Jodorowsky. He has a knack for inspiring people. He got great work out of his dream team, from character designs (Moebius) to ships (Foss) and architecture (Giger).

Visually, there isn't much middle eastern influence as I'd have expected, but it's wonderful stuff regardless. 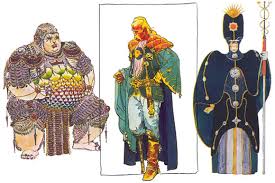 Of course, Jodorowsky decided to rewrite the ending of Dune. That's just the way he rolls. And why not? He didn't read the book anyway. He has an endearing penchant for new age themes and stories where the human spirit triumphs over all. Cosmic stuff. Good vibes. That sort of thing. Just with lots of sex and explosions along the way.

Many of the ideas he injected into Dune, like the miracle child's immaculate conception, would pop up in his later work. Reuse, recycle. Nothing wasted. Dune was the spring board that launched his future.

Ultimately the major studios rejected his ambitious film project, possibly because of Jodorowsky's eccentricity, it's wild scope, and even crazier cost.

But Jodorowsky is not a man to be kept down. The weight of the universe couldn't do that, and undaunted, he channelled all that imagination and work into comics, producing the sci-fi acid trip The Incal with Moebius. It confirms Jodorowsky as one of the most wildly imaginative writers out there. Of course it doesn't always make sense. Who cares? It's more fun than a barrel of drunken flying monkeys on laughing gas. It'll blow your mind.

He has some outrageously funny quotes ("I was raping Frank Herbert") that only he could get away with and still seem endearing.

More about Moebius and Dune can be found here, including more storyboards.

By the end of the film you really wish he'd made his movie. But The Incal is a pretty amazing consolation prize, deserving of a film of its own, if it could be trimmed down and rejigged to make sense to a mainstream audience that wasn't stoned. It's filled with his groovy, positive spiritual concepts, the same sort of ones he brought to Dune.

He's all about the collective unconscious and dreams.

Jodorowsky gets even more cosmic with his next work: Metabarons, illustrated by Juan Giménez. It contains many elements from Incal, only weirder. Same goes for Technopriests. They're both beyond epic. The scope of his imagination is truly breathtaking. There can be no doubt that Jodorowsky is still in touch with his inner child, and a sense of unbridled enthusiasm and uninhibited creativity suffuses his work.

The collapse of the Dune film left Dan O'bannon broke and sleeping on a friend's couch. That's where he wrote Aliens. It must have been some couch. He hired an artist he met while working on the Dune project to design the xenomorph: H.R. Giger.

The rest is cinema history.


H.R. Giger worked on a number of films, but is best remembered for Alien and his atmospheric and disturbing paintings that tortuously merge human bodies with cybernetic parts. He's also known for referring to himself in the third person.

Foss' art graced the covers of an entire generation of sci-fi novels. He worked on the 1980 Flash Gordon film, and illustrated The Joy of Sex, although there are no spaceships in it.

The documentary finishes with some inspirational comments by Jodo, as he's known to his friends.

I left feeling uplifted.
Posted by James Turner at 20:13