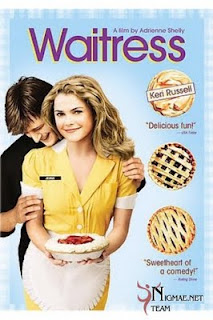 An unconventional romantic comedy, Waitress follows Jenna (Keri Russell), of the title, in her attempts to find happiness, or at least a level of misery she can live with. After a drunken night of conjugal relations with her control freak husband Earl (Jeremy Sisto), she finds herself, ba-da-boom ba-da-bing, unintentionally pregnant and more trapped than ever.

Fortunately she has one stand out ability: she can make magically delicious pies, and stands a good chance of winning a pie contest that will transport her into a new life. Her culinary wizardry also attracts the attention of her earnest and affable doctor (Nathan Fillion).

In film, unlike life, everything happens for a reason. The trick is to make it look natural. Unfortunately, with Waitress you can frequently see the gears of the narrative turning.

It aspires towards the quirkiness of Like Water for Chocolate, but the direction lacks the necessary light touch. The staging is often awkward, musical cues far too heavy handed, and dialogue on the nose.

Russell's performance is uncharacteristically stiff and passionless. Worse, she lacks chemistry with Nathan Fillion. Yet events occur because they must: Russell and Nathan get involved because a romance is necessary, not because they're believably attracted to each other. For a romantic comedy, that's a critical weakness.

The problems Jenna faces, being trapped in a life she doesn't want and forced to make soul crushing compromises, are compelling. In fact, compromise and suffering is something all the characters share in common. There is a bleakness that underlies the film, and characters thrash about emotionally, desperately trying to find some way to quiet their inner torment. Crushed and frustrated dreams abound, and even tip over into areas not often openly explored in cinema.

The ending, however, is a day dream of a cop out, with Andy Griffith fulfilling the role of a Deus Ex Machina.

Hamstrung by a low budget, rough script, and tight filming schedule, the film never quite gels together, which is a pity. It's like a half-formed piano concerto being played by an overly enthusiastic monkey. It needed more time to be smoothed out, refined, then played with a more delicate touch. Despite all that, I still enjoyed the film, particularly Andy Griffith's speech while dancing (shuffling?). It did make me ponder.

Writer/director Adrienne Shelly, in her last performance before her brutal murder, is quite good as Dawn, Jenna's mousy co-worker. I think she understood the material better than Russell and wish Shelly'd taken on the lead role herself. It would have done the film good.

Two and a half MarilyMaos out of five.