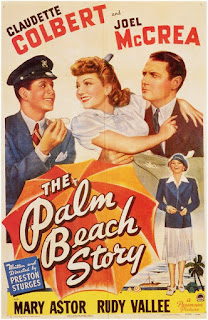 Written and directed by Preston Sturges, it's even more subversive of the genre than Waitress and much funnier.

Claudette Colbert plays Gerry Jeffers, a frustrated wife with a financial failure of a husband (Joel McCrea) who's on the brink of bankruptcy. Ever practical, she decides to  dump Joel's ass, despite still being  in love with him, and run away to seek a richer partner.

Informed by a cab driver that Palm Beach is the best place to get a divorce, she sets off immediately by train, only to get entangled with a drunken hunting club. Mayhem and gunfire ensues, and in the aftermath she steps on the face of one of the world's richest men, John D. Hackensacker III (Rudy Vallee), who is promptly enraptured by the foot of her feminine wiles. First impressions count, and kink has a long history.

Petulant Tom, however, is in hot pursuit, but when he catches up, Gerry passes him off as her brother, to his great consternation. To top it off, Gerry presents him to John's sex hungry sister, Princess Centimillia (Mary Astor).

Despite being a stiff stick in the mud, Tom still has Claudette's heart, and she must now decide between true love and financial security with a charming and affable millionaire.

The ending has a fun last minute twist that resolves everything in a suitably ridiculous but satisfying manner.

A surprisingly fresh film for being over seventy, Sturges weaves together a light hearted tale whose only real villain is poverty. It's a refreshing change from the romantic comedies of today, when there's always one male suitor who's revealed as a despicable slime.

The only character presented as a complete joke here is poor Toto (Sig Arno), a bumbling and inept lothario presumably there to represent French surrender-monkeys.

A real classic. Five silkscreens out of five, taking into account its great age.