The Rise of Skywalker: Heresy and fandom 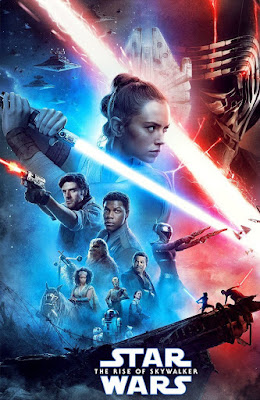 The Rise of Skywalker is an assault on the senses for two and a half hours. I felt every minute. It relentlessly pummels you with quick cuts, kinetic frenzy and hyperbolic CGI.

There are plot holes the size of planets, but the actors are charismatic and the action sequences are impressive. It doesn't 'subvert expectations' like Last Jedi, which is good and bad. I admired Johnson's effort to shake things up (and add a strong POV) to that film, but it didn't work for me as a whole.

Liking or disliking a Star Wars film now is deemed a political litmus test, proof of either your ideological purity, or how reprehensible you are.

My understanding is that J.J. Abrams plotted out a three film arc, Rian Johnson ditched Abram's outline and did his own thing, Trevorrow got fired and Abrams tried to Frankenstein a conclusion. I can hardly believe that's what happened. Maybe someone will write a book.

Star Wars is far more than a film series: it's a quasi-religious movement.

There are legions of dedicated fans who are more passionate about the franchise than they are for any established religion; 15,000 Czech citizens list their faith as Jedi. Fans purchase merchandise, dress up as the characters, and travel around the world, like pilgrims, to fan summits.

Until the late 1800's there was no such thing as an entertainment franchise in the modern sense of the term. Sure, we've had heroes since Gilgamesh and Hercules. But a franchise? They emerged with the Penny Dreadfuls in London in the 1890's. These were cheap pamphlets pumped out at a furious pace, filled with pulpy stories of murder, depravity, and desire that kept people hooked with cliffhangers.

Characters, like Sherlock Holmes and Solomon Kane, were larger than life, didn't evolve or grow, but were eccentric enough to keep reader's attention. People became addicted, and possessive. Arthur Conan Doyle got sick of Holmes and tried to kill him off; he was shocked by the angry fan reaction and eventually brought Holmes back.

Because there's a relationship between the creator and the public. It doesn't belong to one or the other, eventually, but to both. The creator is the dragon rider, atop a powerful, enabling beast. The fans are the dragon, letting the rider/creator guide them to wonder. But if the rider falls off, the disappointed dragon will eat him (or her).

It's a complex relationship.

As a franchise, Star Wars has peeked the interest of hundreds of millions of people. It changed cinema and helped bring about blockbusters, ubiquitous toy tie-ins, CGI and desktop graphics software (specifically photoshop).

The Jedi faith is a pastiche of Eastern Mysticism (Buddhism) plus some woolly thinking. More people are familiar with the Star Wars version than the source material.

Critics act as if they are shocked by the depth of passion of fans, as some have gotten truly vicious (if they aren't Russian trolls). But critics shouldn't be surprised: religious movements and cults are typified by extremist thinking, and have been for thousands of years. A third of the population of Germany was killed during the Thirty Years War, which pitted Catholics against Protestants.

As formal religion in Western democracies fades into the background of popular culture, people are turning to alternate ideological systems to maintain their equilibrium, to help make sense of the world.

The most heated Star Wars criticism has nothing to do with the entertainment value of the films, or their direction or characterization or plot. Instead, it's all about the politics. People want the film to echo their view of the world, and expect entertainment to push forward a validating agenda, to echo, and when this doesn't happen, teeth are bared. Heresy is afoot. Enemies must be purged. Purity must be reestablished, and corruption expunged.

I wonder if Disney quite understands what it has bought.

Good advice for the franchise as a whole.

NOTE: I watched The Imagineers on Disney Plus, and learned that (of course) Disney's already very familiar with fanatical fans: people were outraged by changes to the It's a Small World After All ride. I thought that thing was dull as dry toast as a kid.

Unbridled passion for It's a Small World.