Review: The Girl with all the Gifts (Spoilers)

This is one of the better zombie films I've seen.

Based on the book by M. R. Carey (who also wrote the film adaptation) and directed by Colm McCarthy, it's clever, has decent characters, a good story, and for me, even better, logic behind the zombie infection.

The fundamental problem most zombie movies have is that they lose steam after the initial outbreak. This one doesn't. In fact, it starts long after, and delves into the cause: here, the zombies are just a stage in the life cycle of a fungus. Which is awesome! It adds another layer to the tired genre and gives the film somewhere to go.

The Walking Dead is frustrating because it deliberately avoids explaining anything. Without cause, there can be no solution. No cure to find, no change down the road, no next stage, nothing. Just endless repetition: characters find a promising new haven, find snake in the grass (The mayor is crazy! They're performing medical experiments! They're cannibals! Etcetera), everything goes to hell, and they set off in search of a new haven. Repeat ad nauseam.

Zombies become background noise. There's no satiating our curiosity. It's about survival and people struggling with the 'real' threat: other humans. How trite. In addition, I find the characters badly conceived, and often act more out of plot necessity. Game of Thrones does character so much better. No one else seems to notice this, so what do I know? 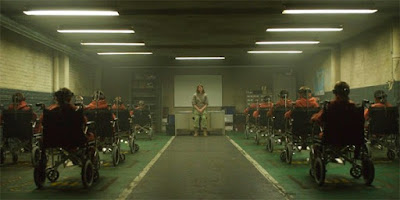 In Girl with all the Gifts, we're presented with new and old paradigms. The second stage infected, babies who ate their way out of their infected mother's wombs, are able to think and function like normal people, but are also consumed with lust for living flesh.

They are contrasted against the surviving humans, who are unable to live with the fungus (actually based on a real fungus that infects ants and compels them to climb up to the top of the forest canopy where the fungus can spore).

The main character, Melanie (played by the fabulous Sennia Nanua) is one such kick-ass, womb-eating fungus-kid. And she's sympathetic, particularly when contrasted against the soulless scientist Caroline Caldwell, played by Glenn Close, who callously wants to harvest poor Melanie's brain. Oh, clever! She too is hungry for braaaains!

Zombie fungus-girl Melanie is loved by her teacher, Miss Empathy, played by Gemma Arterton. Her character has a name, I think (Strawberry Fields?), but she's better remembered by her function: making us feel sympathy for the fungus-zombie-girl Melanie.

She's responsible for teaching fungus-kids in an underground bunker, before Glenn dices their brains. All part of the experiment.

The base is soon overrun by mindless first stage fungus-zombies, and only a small team escapes: Doc Coldwell, Miss Empathy, Sargent Gruff Nuts, zombie-fungus girl, and a few disposable soldiers.

Things go from bad to worse as the team is whittled down.

Eventually, they discover a field lab / bunker and some feral zombie-fungus kids. 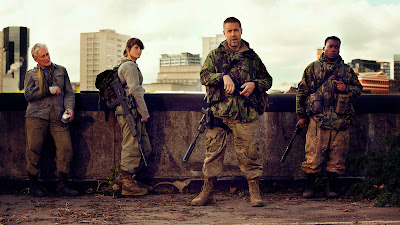 At the end of the film, Melanie is given a choice: sacrifice herself to save humanity, or condemn the remaining humans and endorse her own fungus-kid kind.

She makes the latter choice, and declines to allow her brain to be used to create a vaccine for the remaining humans (or to sacrifice one of the feral fungus kids in her stead), and sets fire to The Great Fungus Tree, which will spread spores across the world and bring about the end of Humanity Classic.

The only human left is Empathy Lady, who was left unconscious in the sealed field lab when the tree went up. Unfortunately, she'll starve to death fairly soon, because everything outside the lab is now contaminated with fungus spores, including the water.

Fungus-humanity is going to have to start all over again. Only they go into blood lust frenzy whenever they get hungry. Forget Snickers: these guys eat each other. 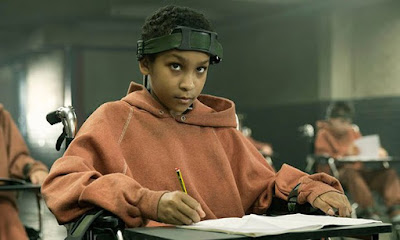 Glenn Close's far less sympathetic than Melanie, with whom we're supposed to empathize. And Miss Empathy hates Glenn, who once played a character who boiled a bunny. I don't think that's coincidence in casting.

But look at the actions of Melanie: she ruthlessly beats to death another child to establish pack dominance, and save her friends. So she's willing to kill a child to save her own.

How's that different from the doctor / scientist?

The Girl also decides, on her own, to exterminate humanity. Talk about making an executive decision. That's the neatest trick of the film: to get us on side with our own elimination.

The result? A world of feral, cannibal children who go into blood frenzy when they're hungry and have no other food sources.

Good luck with that.

And the kids have no technology. At all. No knowledge of social theory, hydraulics, sanitation, combustion, anything. There's only one tutor on the planet for all the zombie kids. And she's gonna be dead soon. 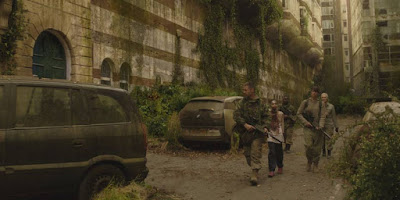 Pro-fungus-zombie propaganda at its best.

Give it a watch.