Piranesi: Then and now, amalgamated

Piranesi  began his Views (Verdute) of Rome series in 1748, and kept at it until his death. The prints were collected by his son, Francesco, who followed in his father's footsteps and became a skilled artist in his own right.

The Prisons (Carceri) series was begun in 1745, of which I have written before and will write again, as it is a source of endless inspiration. Having visited Rome, I have no doubt now that the series itself was sparked by the cyclopean Roman ruins he was spending so much time with. Just as The Prisons series has, in turn, inspired so many others.

I tried to follow in Piranesi's footsteps in Rome. Many of the locations from which he drew are no longer accessible to the public, are underground (within the Via dei Fori Imperiali, for example), in thin air (some thirty feet worth of sediment and debris have been removed from the Roman Forum since his day), or are now blocked by trees. I was far rigorous in my approach. Nevertheless, it was fun to see how much, or how little, has changed. 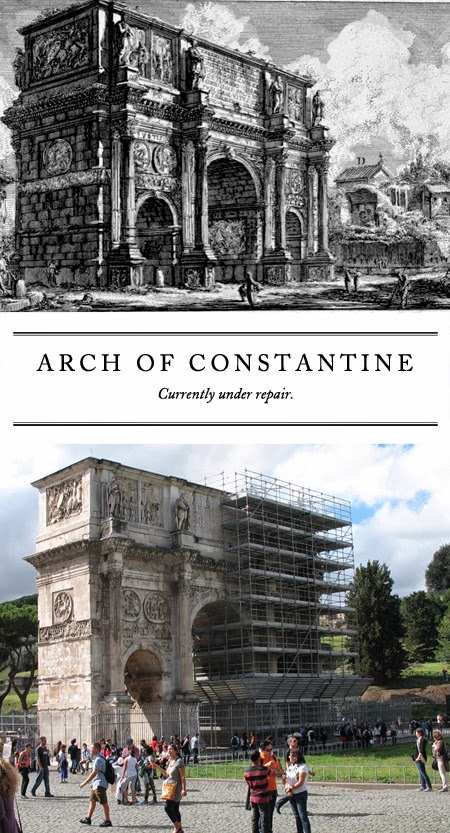 I've always found this building, Castel Sant'Angelo, fascinating, as it is unlike anything else from the Imperial Period. It was originally Hadrian's Mausoleum (according to some it originally had trees on top); the ashes of succeeding emperors were also placed here, up to Emperor Caracalla in 217AD. You can still visit the cavernous inner chamber, but it's quite bland now. On the other hand, the view of Rome from the top is fabulous.

The building squats just off the river Tiber, and the bridge Hadrian built to reach it, the Pons Aelius, still stands.

It was converted into a fortress in 410, incorporated into Rome's fortified walls, and stripped of statues and decorations. Later it became a castle under the popes, and was the refuge of Pope Clement VII during the Sack of Rome in 1527. 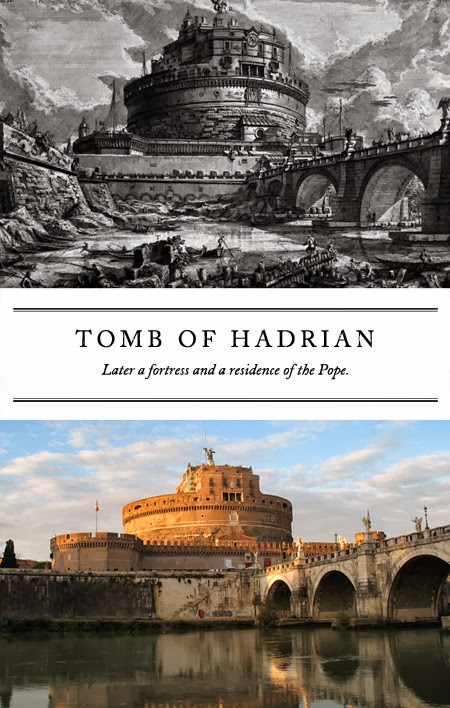 Veduta di Campo Vaccino (View of the Cow Pasture) was probably drawn from a window of the Palace of the Senators which was built on top of the Tabularium's remains. You can see the very top of the remaining pillars of the Temple of Vespasian in the lower right, which have been almost completely buried. The Colosseum can be seen in the background on the upper left, above the Temple of Antonius and Faustina. 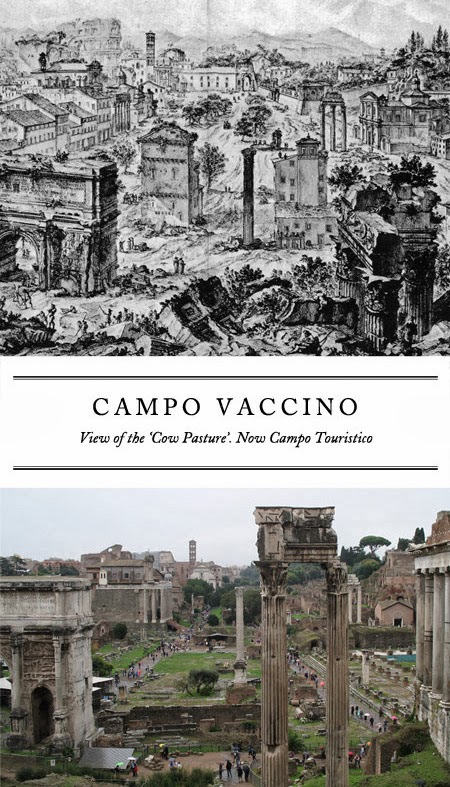 The view of the Colosseum and the Arch of Constantine is from the Palace of Elagabalus. 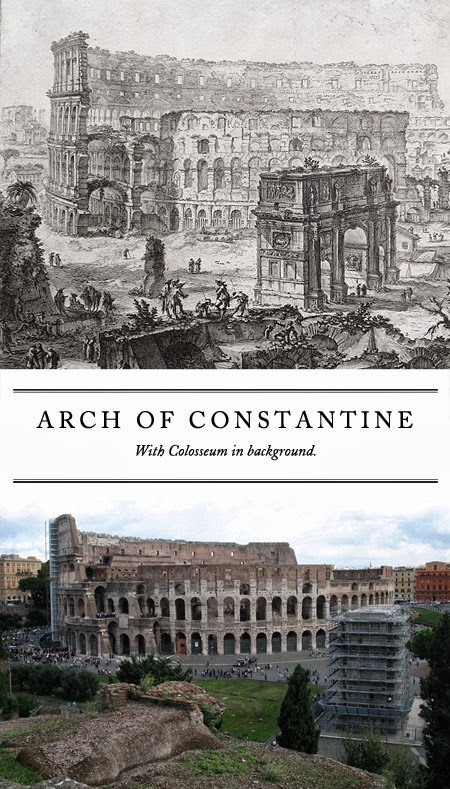 The Basilica of Maxentius was completed by Constantine. Most of the structure was brought down by an earthquake in the 10th century. 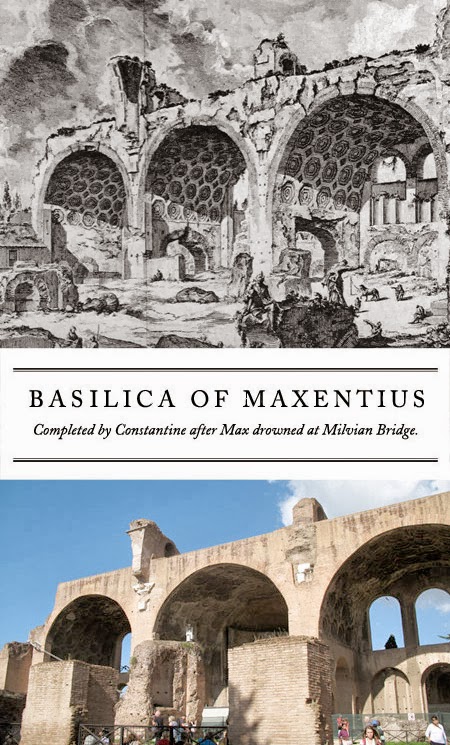 The image of the Roman Forum below isn't Piranesi, but it's a decent match up and shows the reverse facing of the Campo Vaccino. Between twenty and thirty feet of earth has been removed. Sediment, debris, and silt washed into the low lying forum over the centuries from the surrounding hills. 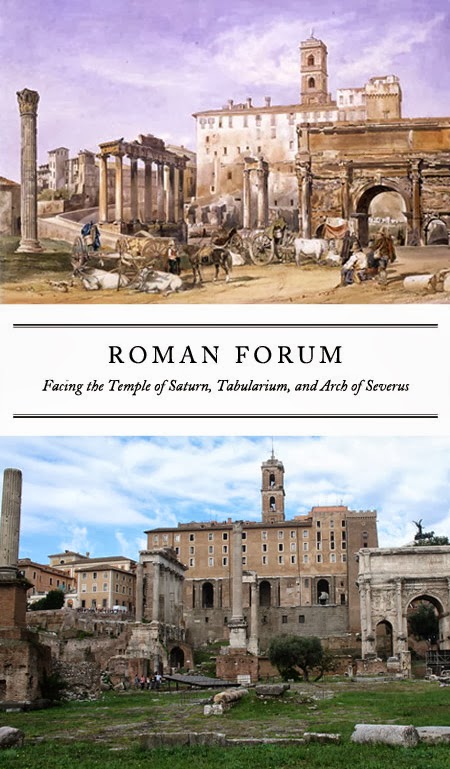 The Arch of Septimius Severus was built in 203 AD by his sons. Beyond it are the Gemonian Steps that lead up Capitoline Hill. 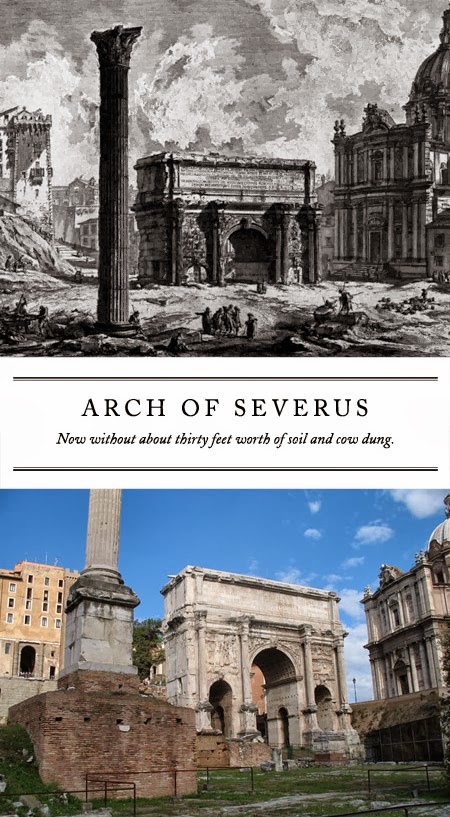 The Temple of Antonius and Faustina has become a hybrid of Roman Imperial and Renaissance architecture. Antonius was one of the wise emperors. He fought not a single war during his reign and didn't get within 500 miles of a legion. He and his wife founded charities to help orphaned children. Faustina spent her life assisting the poor. Not stuff that gets the press, as Nero and Caligula do so readily with depravity and hedonism.

The gentlemen below is walking along (or rather above) the old Clivus Capitolinus road, which ran up the Tarpeian Rock to the Capitolium and the Temple of Jupiter, Best and Greatest. The Temple of Jupiter, supposedly the most magnificent of all Roman temples, existed in good repair until it was demolished to make way for a Renaissance era Walmart.

There are a pair of these so-called Horse Tamers, representing Castor and Pollux, which stand on Quirinal Hill in the Piazza San Pietro. Copied from Greek originals, they now flank an Egyptian obelisk.

The Theatre of Marcellus is the only remaining Imperial or Republican theatre in Rome, it was turned into a fortress and later private residences.

Trajan's Column now sports a saint atop, instead of it's namesake. The multistory Trajan's Forum, which surrounded it, allowed the upper sections to be viewed more easily in ancient times. Now, you need binoculars.

The Temple of Saturn once sat atop the Roman treasury. It was destroyed by fire multiple times and rebuilt.

Trajan's Column can be viewed from two angles, both including a church in the background. Piranesi rendered both.

The Church of Santa Maria Maggiore is built atop Roman ruins, some six meters below ground now, which can be explored through a series of tunnels. Some murals and mosaics are still visible. 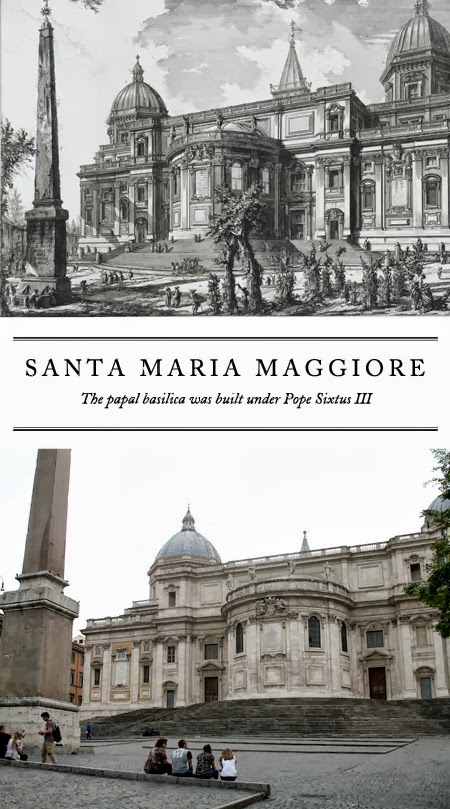 Max was drowned at Milvian bridge after his army was defeated by Constantine. His Basilica was then completed by his opponent, but mostly destroyed later by earthquakes. Only one wing of this colossal building remains standing. 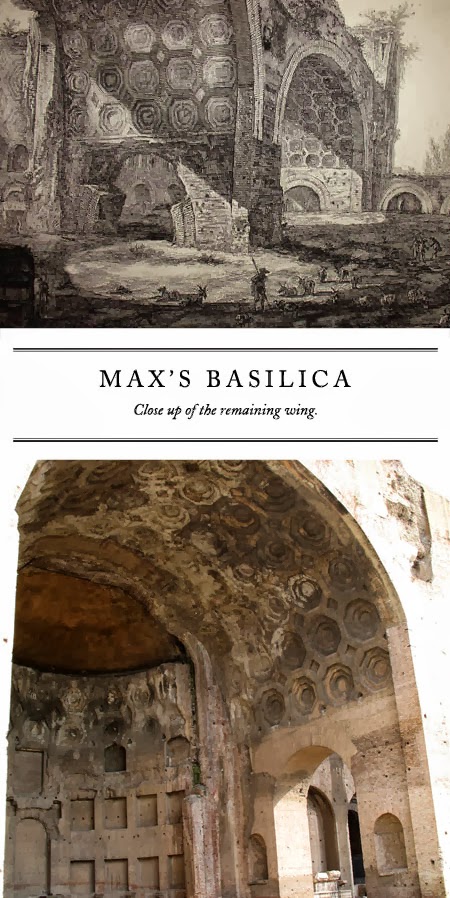 The image below is not a Piranesi, but it's a nevertheless fascinating rendering of what the northern end of the Roman Forum might have looked like at its height. On the upper left, you can see the Temple of Jupiter. The Tabularium runs along to the upper right. Below is the Temple of Concord (of which little remains today, it having been razed in the 15th century and turned into a lime-kiln), and in front of that is the Arch of Severus. The arch is still with us thanks to it being incorporated into a church. 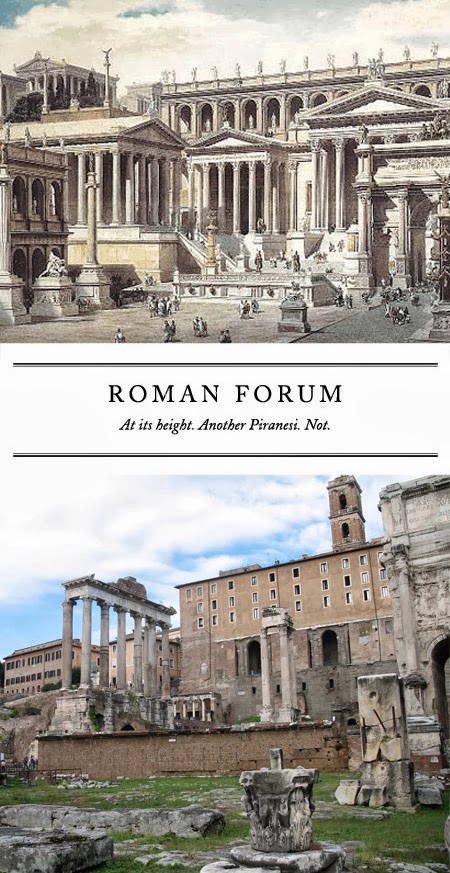