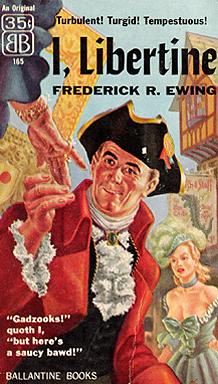 "Shep saw through this hypocrisy and ranted about it at length one night. In a burst of inspiration, he speculated that if enough people requested the same title of a book that didn’t actually exist, it could indeed make the coveted New York Times Best Seller List. The Night People went crazy over the idea; WOR was flooded with calls from listeners pledging their support…

"And sure enough, it happened: by early summer 1956, the book that didn’t exist made The New York Times Best Seller List … and kept inching upward on it. One literary gossip columnist even wrote in a leading newspaper, “Had a delightful lunch the other day with Frederick R. Ewing and his charming wife, Marjorie.”

Of course, neither Mr. Ewing or his wife Marjorie existed, which would make for an unusual lunch date. What did they order?

Eventually a real book was produced by Theodore Sturgeon, working with the original prankster, Jean Shepperd.

Check out the article here.
Posted by James Turner at 09:34