I really didn't care for The Book of Boba Fett. And I thought Kenobi was an amateurish bore.

There are few recognizable aliens! Or planets! Or spaceships!

WHERE IS DARTH VADER?

WHERE IS THE EMPEROR?

Where are the Stormtroopers falling over in droves every time someone does a back flip and points a finger at them?

Where are the endless lightsaber fights?

Where is the constant non-stop action and meaningless banter from cardboard archetypes?

We are now 10 episodes in and not ONE Death Star has blown up!

And where, oh WHERE, is Turdooine?!? Sorry, I mean, Tatooine. (I hate that planet. Even the characters in the franchise know it's the ass end of nowhere. Is that why the writers sadistically keep taking us back to that desert stub? To make us hate the damn planet as much as "Are you an angel?" Ani did? Is it psychological warfare? Cruel and inhumane...)

Where are all the wink wink nudge nudge callback shots?

You're right: Star Wars, as George has said repeatedly, is for children. 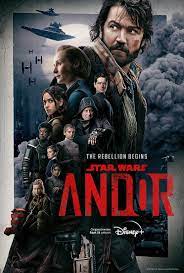 Andor is NOT for children.

It's smart, it's well written, there are interesting characters with depth, the dialogue is complex, and the story takes its time being told.

It builds and builds to meaningful crescendoes thanks to the care and effort spent on fleshing out the characters beforehand.

So when action DOES happen, it's meaningful. Action after action between action before more action and as a prelude to the real action is just a meaningless cacophony.

Honestly, I'm amazed Andor got made.

Unlike the other Star Wars shows (okay, Mandalorian was decent, and The Volume tech is flat out mind blowing). And it is quite obviously for adults.

You can tell Gilroy is a history nerd. The show evokes totalitarian regimes on earth like no other Star Wars program.

It makes The Book of Boba Fett, about your friendly neighbourhood (and Disneyfied) drug cartel overlord, look pathetic, juvenile and ridiculous.

Andor is shaping up as a show with something to say.

Kathleen Kennedy has, from my perspective, always been a risk taker. The first directors she picked to carry on the franchise were all young turks with their own emerging voice. They were exciting choices. They didn't work out for the most part. But then, Andor, too is a wildly risky choice to make. And I'm glad they gambled on it.

I'm even more glad the second season is already green lit, so we'll get a proper wrap up for the series. I know it leads into Rogue One, which I actually hated, but Andor's so good I just don't care. I am enjoying it for what it is.

I have no criticisms. There may be quibbles, but I'd have to think about it to come up with anything.

It's superbly well done so far (at episode 10, which I've watched twice now. I haven't watched anything Star Wars twice in over twenty years).

I still can't believe it got made, especially after the dreck of Kenobi and Fett, the creative bankruptcy of The Force Awakens, the farcical Last Jedi and the utterly risible Rise of Skywalker.

This is a reflection of my own tastes, of course. A seven year old can appreciate the Star Wars movies (even the first two original films; the good ones are all ages), but they likely won't enjoy Andor. A lot of the fandom apparently doesn't like it, either. I can understand why. They're used to the franchise being something else.

It's not for everyone.

But it is the Star Wars show I've always wanted to see.

Give it a watch. I can't recommend the show highly enough to anyone who's a history or polisci nerd.