I don't read as much since getting tinnitus, so during The Great Covid Lockdown I consumed copious amounts of noisy TV, and subscribed to multiple content platforms. Too many. There's a mind blowing amount of material to choose from.

Even if 90% of everything is crap, as the maxim goes, there's just so, so much, we can drown in the fabulous.

And there's no question: the work of all these talented creators, writers, actors, directors and crew helped millions get through the pandemic.

Praise be to the arts!

On the other hand, I have become thoroughly spoiled and jaded thanks to a surfeit of lavishly produced entertainment.

These are the shows that got me through:

Law & Order (Original flavour, SVU and Criminal Intent)
This long running procedural (20 plus years) has literally thousands of hours of content. Amazon Prime carries half the seasons of each iteration. The shows predictable format was comforting, in a weird way, during the early pandemic, and it's an easy show to just leave on in the background while you draw. Solid time waster, but gets weaker as the seasons stretch on.

Deep Space Nine *
Watched the whole thing, start to finish, every episode except for a couple Quark focused ones which were too cringe inducing. I’d never seen it all before, and there were holes in my understanding of the grand arc of the later seasons. At 126 hours of content, it took almost 4 months to get through. Great characters, built up over time and then thrown into a grand Dominion War arc. Lots of well grounded character humour which doesn't undermine the dramatic aspects. Worf, Odo and Garak are especially good. O'Brien must suffer! More here.

Voyager
Watched a good chunk, but not all. Skipped many episodes from the first 2 seasons; I hate the Kazon, they’re both annoying and boring. Voyager (like Next Generation and DS9) gets seriously good starting in season 3.

Enterprise
Decent Trek, but not a favourite. The characters aren't as a colourful or compelling as on DS9. There are season long story arcs I’d never seen; lockdown presented the time to do so. Overall, satisfying.

The Expanse *
Insanely good, compelling, gritty sci-fi. The Expanse is as close to realistic as any sci-fi epic has ever gotten. It also complex and demands focus from it's audience. Not easy to get into, but well worth it. The only down side: it's based on a series of books, and they aren't going to adapt the final three. Also, it was filmed in Toronto, my home town, and some scenes were shot near where I live. 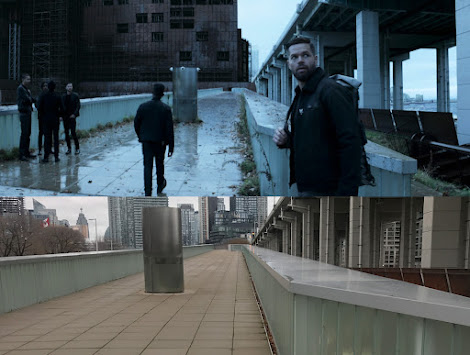 The Boys *
Think superheroes as sports team franchises. Scathing satirical fun. Also gratuitously gory and vulgar. I loved it. Shot in Toronto, too, so there's the added joy of spotting familiar locations. The Boys dives into the sickness and corruption of a celebrity culture run amuck. Unbound and egotistical (anti-)superheroes behave as badly as you'd expect Greek gods to.

Invincible *
If you need more subversive, satirical superhero fare (and who doesn't?), Invincible deconstructs what's left. Didn't expect much from this show, and came away seriously impressed.

Better Call Saul *
Dark, angsty and depressing, yet I couldn’t stop watching. The characters are nuanced, incredibly well realized, and drive the drama. A show worth studying.

Barry *
Twisted tale of a contract killer who decides he wants to become an actor. Dark and sardonic. The show manages to get you to actually root for a mass murdering sociopath. He's also frequently cringe inducing; think Larry David... if he was an amoral serial killer.

Raised by Wolves *
I still can't believe this mind blowing, batshit insane series was ever given the green light in the first place. People spent a serious amount of money on this, and it shows: it's gorgeous and eerie and possibly the weirdest show ever made. I love it: it's got atheists vs. Mithraic fundamentalists, climate apocalypse, android weapons of mass destruction that do double duty as nannies, flying snake babies and people turning unexpectedly into trees. A must see. Of course, it's been cancelled. This makes me sad.

Tales from the Loop *
Another gem, especially the finale directed by Jodi Foster. Contemplative sci-fi without an explosion anywhere to be seen. Based on a series of paintings. More about it here.

The Witcher *
A monosyllabic Henry Cavill slices and dices weird monsters in a time jumbled tale that’ll have you scratching your head. Addictive, with incredible fight choreography.

Russian Doll (first season) *
Takes awhile to get into, but the payoff was worth it and the show has something to say.

Squid Game *
This show takes no prisoners. First it gets you to connect and empathize with the characters, then puts them through sheer, unrelenting hell. Brutal and unsparing in its commentary on class conflict. Something I've learned to expect from Korean dramas.

All of us are dead
More Korean class conflict, this time through the metaphor of a zombie plague outbreak at a posh high school.

Archive 81
Creepy, atmospheric, and full of foreboding, the spell is only broken when a CGI demon shows up. First season ends on a cliff hanger, and it's been cancelled. So...

Cobra Kai *
A wonderful, guilty pleasure. Think teen soap opera meets musical, except instead of musical numbers breaking out, karate fights do. I'm amazed the kids (and more than a few adults) aren't all in prison. Has better fight sequences than those in Matrix Resurrections. A lot of humour is mined from the nature of the characters, without undermining the dramatic aspects of the show. Oh what am I saying: it's increasingly ridiculous but damnit I love it.

To the Lake
The zombie apocalyspe, Russian style. Bleak and cynical, especially regarding the behaviour of the authorities. Also a family drama. D'aw!

Devs *
Stylish in the extreme, it's an unexpected gem on Disney+ that I'd never heard of before. Some may find it almost pompous, but I thought it was fascinating. Fantastic, striking art direction, unlike anything else I've seen, extremely moody and carefully paced. Give it a watch, you won't be sorry.

The Mandalorian *
A simple story about a bounty hunter and a little green troll baby. The most mind blowing thing about it is The Volume, or Stagecraft, or whatever they call it now: an almost 360 degree video wall enclosure on which you can run full motion backgrounds using a video game engine. Allows actors to see (and react to) the imaginary environment, as opposed to big blank green screens. Also speeds up the production process and casts the actors in convincing natural light.

Book of Boba Fett
A simple story about a bounty hunter who decides he wants to be a benevolent, kid show friendly crime lord. You know, extort, blackmail and murder people, just with respect. Veers off the rails and gets taken over by The Mandalorian for two episodes. Unparalleled production values, but the characters are thinner than cardboard and there's not a motivation to be seen.

Peacemaker *
Smart, satirical superhero deconstruction, it has everything Boba lacks: characters, character arcs, character motivation, sharp humour and heart. Also two sociopaths and a psychopath. Watch it. I yammer on more about it here.

Wandavision
Starts out strong with an intriguing concept and lots of mystery flying around. I was hooked! Unfortunately, the resolution was disappointing CGI stuff.

Loki *
Loved the absurdist humour and ultra-powerful TVA, a dysfunctional bureaucracy that manages time itself. Very stylish, with catchy music, graphics and quirky characters. Owen Wilson and his jet ski ambitions were especially endearing. The finale felt a little flat to me, and there are some creepy aspects to multi-Loki romance, but overall it was a ton of fun.

The Falcon and the Winter Soldier
The action sequences are right out of a Jack Kirby comic book, but the story was confusing. I didn't get the motivation of the villains.

I did watch a few other documentaries sporadically, but I can't remember specifically. Some true crime, economics, cryptocurrency, yada yada.

I went very heavy on sci-fi and superheroes.

Law & Order alone, however, has a massive amount of programming. I remember thinking early on in the pandemic that I might make it all the way to the first vaccine roll out with just Law & Order alone.

I feel so burned out on TV.