I recently watched both Disney's The Book of Boba Fett and HBO's Peacemaker. Both shows are escapist fantasy: one a Space Western, the other a... uh... dysfunctional superhero investigation / alien invasion show.

Jon Favreau
I like Favreau. He directed the first Iron Man movie, which was a ton of fun. He's been involved in pushing forward effects technology in Hollywood, after growing frustrated with green screen while shooting The Jungle Book. The result is The Volume, a stage surrounded by a solid, seamless wall of video screens upon which anything you like can be projected. They use the Unreal 3D engine to project environments and creatures. Incredibly, they are high fidelity enough to be used on film as moving backgrounds, allowing actors to respond in real time to events/monsters/etc. It also allows reflections to be captured on The Mandalorian's shiny armour.
When I first saw The Mandalorian, I thought the light was especially good. Characters were bathed in the light of the environment they appeared to be in, so I thought it had to be shot on location. Some clean up work is need around things like the break between the wall and the ceiling, but that's about it.
This makes shooting an effects intensive show like The Mandalorian feasible on a tight TV schedule. I'd say a tight budget, too, but The Mandalorian still costs an arm and a leg to produce. Without The Volume, though, they probably couldn't.
Favreau wrote, along with Dave Filoni, a good deal of the first two seasons of The Mandalorian. It's a fun, diverting show with lots of atmosphere that evokes samurai films and old westerns. It gave us Baby Yoda, the cute, blatant merchandising opportunity.
The show does feel kind of slight narratively. Scripts are more about exploring technical capabilities than character.
James Gunn
I've been keeping an eye on James Gunn since his Dawn of the Dead collaboration with director Zach Snyder. Gunn has an edgy sense of humour, and is one of the funniest, smartest writers in the pop culture film space. The Guardians of the Galaxy Marvel films are my favourites in the MCU (along with Watiti's Thor: Ragnarok): a perfect blend of comedy, adventure and heart. Of all the big, bloated super hero films out there, for my money, his have the strongest characterization.
How would you describe DCEU heroes? They seem more defined by their powers, except Batman, who's brooding and emo.
Marvel heroes have personality by the bucket full, and that's the main appeal of their films. They may be based on archetypes, but Gunn fleshes them out, and mines them for situational, contextual humour.
Gunn doesn't abandon the adventure angle and make everything a joke. He brings flawed characters to extreme situations and lets the humour roll out of that. It keeps the action on track while providing comedic release.
It's great stuff. 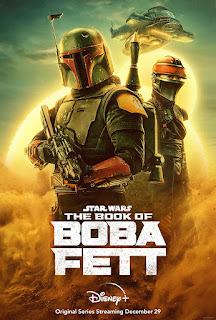 The Book of Boba Fett
A spinoff from The Mandalorian, it centres on the eponymous, helmeted bounty hunter from the original Star Wars trilogy. A man of few words who was ignominiously dropped into a giant maw, he accrued a reputation as a bad ass over the years thanks to The Extended Universe. I can't say he's ever been a big favourite of mine; there was never much there to begin with. The Mandalorian, in many ways, has already supplanted Boba, being essentially Clint Eastwood's Man with No Name in Spaaaace.
Well he's back. He survived the Sarlaac pit, got enslaved by Sand People, won his freedom and became part of their cute ROOOIK! ROOOIK! family (hey, they wear helmets, too! So much in common), then decided to take over Jabba's crime empire for reasons. Because. 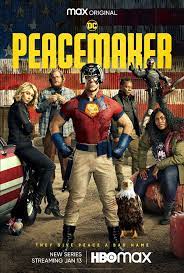 Peacemaker
Gunn resurrects our favourite egotistical, self-righteous vigilante crusader, and his quest to bring peace, no matter how many people he has to kill to do it. Gunn throws in a racist father, a disturbing childhood, a rogues' gallery of supporting characters for Peacemaker to bounce off of, and then sets them against an alien invasion by blue butterflies.

The Book of Boba Fett has no characters. It has plot devices and empty shells, but characters? None.
Okay, there is one exception that proves the rule: The Mayor's Major Domo. He's unctuous and obsequious, but also conniving and duplicitous. Yet he's also completely peripheral, a secondary or even tertiary villain.
You could argue that Fett learns the importance of family by being enslaved by The Sand People, but even that arc didn't work.
Fennec Shand's flat as cardboard, only to explain plot points and kill people. She acts stern and bad ass, but it's entirely superficial.
There's nothing underneath. No motivation. No heart. Nothing but marketing and merchandise.
The other 'characters' are even worse: the gumdrop bike gang are defined by their colourful speeder bikes. Fett's ship has more personality.
The repair lady at the spaceport gives it her all, admittedly, but she doesn't have much to work with. The humour feels out of place and forced.
Peacemaker, on the other hand, is overflowing with characters, motivations, and arcs. There's emotion, motivated conflict, and growth. Not just growth for the main character, but for all the characters.
It's a shock going from bland Book of Boba to Peacemaker, as it makes it so strikingly clear what's wrong with Boba: the writing.
Worse, for two episodes Boba turns into Season 2.5 of The Mandalorian! Bold move, in a way; I don't think I've ever seen a show sidelined like that for the parent program.
Fett's not decisive, he waffles and sits in meetings while others speak for him.
He hovers, for example, over the Sarlaac pit while it attacks his ship, paralyzed and incapable of acting.
Fett would benefit from being more proactive, and letting mystery remain around many aspects of who he is. His actions should define him, not his board meetings.
Fett's desire to become the Mr. Rogers of crime lords, just and benevolent, is very Disney, but entirely out of character.
Peacemaker, on the other hand, gets fleshed out over the course of his show. We learn why he's so messed up (a holy hell of a childhood dominated by a psychopathic, racist father and accidentally killing his own brother).
Peacemaker's supporting characters are all given time to shine, snappy dialogue and a distinct voice. You get a sense of who and what they are, even Eagly, a bird.
Even the bird on Peacemaker has more personality than anyone in The Book of Boba Fett.
To be fair, Boba's Book looks stunning' it's pushing ahead visual effects a couple decades. Every element of the production is first rate to the point of mind blowing.
Unfortunately, it just underlines how essential writing is. I have been to sci-fi conferences where there were Lucas Film employees on panels. I remember one, a very prominent and talented guy who does concept art, deriding screenplay writing as so simple that any idiot can do it, and then proceeding to create a screenplay with the audience. A mega block buster concept in five minutes! He was tongue in cheek, or at least I thought he was...

Watch Boba for the visuals, then watch Peacemaker for a fun story with outrageous characters and (a twisted) heart. Plus, it's very funny.
Posted by James Turner at 10:49