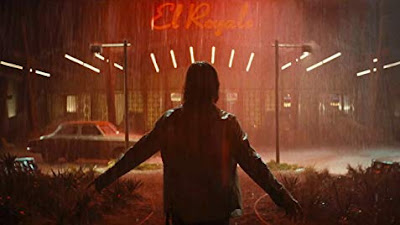 "The El Royale is run-down hotel that sits on the border between California and Nevada. It soon becomes a seedy battleground when seven strangers -- a cleric, a soul singer, a traveling salesman, two sisters, the manager and the mysterious Billy Lee -- converge on a fateful night for one last shot at redemption before everything goes wrong."

After sleeping on it, I liked it more, despite some of the out-of-the-blue twists.

One is beautiful, the other isn’t. One is a gift that helps and consoles and loves, while the other is manipulative, exploitive and deceitful.

We see both in Drew Godard's Bad Times at the El Royale.

The film touches on this theme from multiple angels. Basic human decency, and the struggle of ordinary people, is pitted against preening narcissism.

Some characters reveal traits that aren't even hinted at, leading to a bit of a disconnect, but it didn't destroy the flow for me.

It's got a Quentin Tarantino vibe, just softer, not as eccentric. It's also not bubbling over with pop culture quotables.

But the themes are deeper.
Posted by James Turner at 10:14