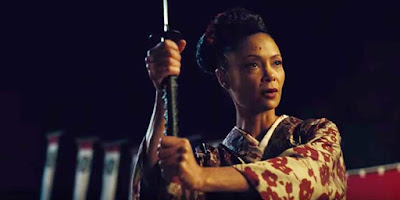 Yet Shogun World is just be a replication of Westworld with a different cultural skin. Same stories, different dressing. It's both disappointing and a sly commentary on the nature of story telling: some things are universal.

The endless violence is tiresome, with almost every episode ending in a meaningless bloodbath. I get the point: people are shits. I don't really need a TV show to tell me that. Are they deliberately trying to put us off with excess, to drive the message home, or are they out of ideas?

Meanwhile, back in Westworld proper, poor Teddy is betrayed by Dolwatt (Dolores / Wyatt), who's going to reprogram his brain. So sad, for both the devoted Teddy and the now ruthless Dolores. Their happiness is a lost cause. The worst thing is, she actually does love him. She just loves the revolution more.

Be careful whom you fall in love with.

Maeve, on the other hand, has more reason for hope: she's developing the power to control androids with her mind. Yet she only uses it to compel suicide. Why not just turn those she controls into helpful allies? They are tabula rasa, empty vessels until you program them. Flip a few settings and they're your best buddies.

Teddy's becoming more interesting than Dolores, who's hampered by the annoying Wyatt faux-personality. The Man-in-Black is gaining nuance, and I look forward to his interaction with his alienated daughter.

Bernard's fascinating as always (the actor is amazing), but he just seems to be going around in loops, character wise.

I'm not sure who I'm rooting for anymore, and that may be the point.

Funny that Maeve is getting the very kind of power Dolwatt craves. Dolores / Wyatt is actively trying to influence the world, to replace humanity with android-kind, while Maeve is just trying to cut through the bullshit and get to her daughter.

It's not going to end without significant suffering for one of them. Or both. Or everyone.