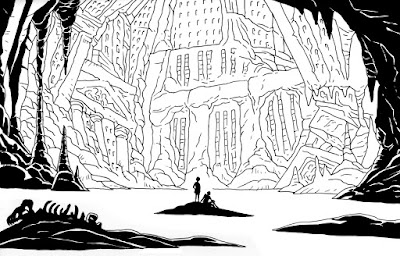 They were in the middle of a vast cavern, hundreds of feet across, coated with the green slime, and standing atop a convex slab of rock. A glowing green gash far above marked the crevice they had fallen through. Theo let out a low whistle, amazed to be alive. “That was some fall!”

“We were lucky. A few feet to the left, and splat," replied Riley.

“Went splat enough as it is,” said Theo, feeling his bruised ribs. It hurt to take deep breaths, so he kept them shallow. He felt his arm. At least the bullet wound wasn’t bleeding anymore.

Riley caressed a swelling bruise on her left arm. It was almost black. “The pool’s deep there, in the centre.”

The walls of the chamber were regular and patterned. It took Theo a moment to realize they were enormous, petrified buildings that had been compressed together at odd angles, into a solid mass. He could make out what were once windows, casings and sills, jutting slightly out from flush facades. Dribbled minerals had filled the windows and distorted the building surfaces, like fungal growths turned solid stone.

The original city must have been huge. How could so many people in one place be fed? It boggled Theo’s mind. Maybe they had lots and lots of Boxes of Delight.

Stalagmites and convex rocks jutted out of the icy water that covered the chamber floor. The rocks were themselves dotted with mounds that looked like melted machinery. The odd, contorted shapes intrigued Theo: what had they been, ages ago? What marvels had they performed?

There was no way to tell now.

He noticed bright, wiggly lines slithering over the walls in the distance. He squinted and made out legs on them. Hundreds and hundreds of legs. The moving lines were giant, semi-transparent centipedes, with nodes of glowing green at each end.

“They must be living on a diet of that slime,” said Riley softly. “Gross.”