The Last Jedi Review (and SPOILERS) 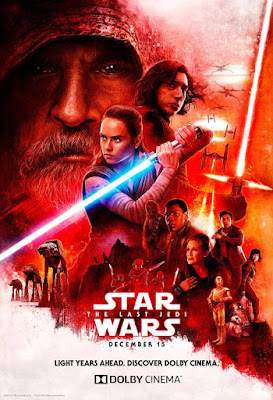 I didn't mind it. On one level, it's a great deconstruction of hero tropes. Aspects are subversive for the genre. There was some spectacular (if senseless) action. The film did raise irksome questions, some more nerdy (and admittedly irrelevant) than others.

Maybe i was grumpy.

Here are thoughts that shouldn't have occurred, in no particular order:

1) Canto Bight made no sense. How do you have arms dealers selling to both sides in a binary state system? That only works in a multi-state system where you are selling from a third party nation. Any state locked in existential conflict with another, which allows arms sales to their deadly enemy, is inherently incompetent.

It would be like Northrop Grumman selling missile defense systems to the Soviet Union during the Cold War. They'd be arrested immediately. Same goes for any Soviet factory that tried to sell advanced torpedoes to the USA, for example.

Selling under the table would also be ridiculously risky, jeopardizing the entire business for a few extra sales. It makes no sense whatsoever.

Secondly, the war started with the complete destruction of the Republic (?) fleet. So who have these dealers been selling to? There is no indication that the Republic fleet has been rebuilt, and there's been no time to do so, either. The war hasn't been going on long (Finn was still in med bay from his injuries in the last movie, and that's when the war started). So the idea that arms makers have long been profiting from human misery in this war doesn't make sense either.

And if the Republic and First Order were frequently at war, why not carry the battle to a conclusion and destroy the Space Fascists? Have they not heard of 'unconditional surrender'? Why didn't General Leia and the Republic finish them off?

Finally, how would a state like the Republic defend itself from the wanton aggression of Space Fascists if they didn't have arms manufacturers? What were they going to use? Rocks?

They're going to fight planet-destroying hyperspace-lasers with love.

Good luck with that.

2) Why didn't some of the First Order ships (they had a whole fleet) use short hyperspace jumps to get ahead of the fleeing Resistance? They had lots of fuel. Why pursue the rebels for... what, hours? Days? A week?... just using subspace drives. It makes no sense, when the Rebels are perfectly capable of using short hyperspace jumps to close distances quickly (see the next point). Can't the First Order figure out that they could get AHEAD of the Rebel ships using such short jumps?

3) If smashing your flagship into a much, much bigger flagship (as Admiral Holdo does) can destroy it easily and spectacularly, why not build lots of kamikaze cruisers? If I invest 10 unit of production in a ship, and you invest 100, and I destroy your ship with mine, you are down 90 more production units than I am. Does this tactic not suggest it is a bad idea to throw all your resources into one huge vessel? Did not naval strategists change fleet composition with the coming of the aircraft carrier? The battleship went away. Carriers were large for a functional reason: to carry aircraft. The First Order builds enormous, easily destroyed ships because...? Is it the same reason why I'd build big Lego ships as a kid and then destroy them? Who is doing their strategizing?

It was Hux who did the strategizing, wasn't it?

Has their accountant talked to them about how they're investing their resources?

4) After Holdo flew the Resistance flagship into Snoke's even more immense flagship, the ship was in dreadful shape. It was cut in half. Sections were spinning off into space. Hull integrity was gone. Presumably it was blowing up, because everything in the movies explodes. The hanger with the ground vehicles (AT-STs) was in flames. The next thing we see is an organized landing on the salt planet, as if nothing bad had happened. At all. Ship blew up? Nevermind.

Where is the rest of the crew? Did they not abandon ship? Why are the survivors not more disheveled? They just escaped a disaster worse than Titanic, with dialogue every bit as bad.

5) After the fight with Kylo aboard the super-duper-big star-destroyer thing, how did Rey get aboard the Millennium Falcon?

6) The ground flyers on the salt planet were rickety. Poe put his foot through the hull of his. This point is emphasized. Yet Rose then flies her already-falling-apart vehicle right into Finn's, which, at high speed, would very likely kill (or severely maim) them both. And get them captured, to boot.

This is a wiser move than flying into the death gun (which could delay the enemy attack and serve a purpose) because?

Wait! I know the answer. The answer is luuuuuv.

7) Bombers in zero-gravity? I hear that they were magnetic bombs, but this is never explained properly. The distances in space are vast, so using bombs without propulsion or serious acceleration seems just... dumb. Really really dumb, especially when you put them on ships that move slower than I can walk. They used to have Y-wings. Those were faster. Who was in charge of equipment purchasing for the Resistance?

9) Why are the two henchmen of Snoke such laughable losers? They should be a comedy duo playing clubs not out menacing the galaxy.

Their talents are being misused.

And why would anyone put Hux in charge? I wouldn't trust him with a call centre, much less a space army.

Are you seriously telling me there was no one out there more qualified?

10) Wildly unrealistic schemes are shown as being unwise by Poe's early heroics, and later by the failure of his scheme with Finn and Rose, which dooms most of the fleeing rebels in their tiny ships (who are sold out by DJ). This is actually pretty cool, in a way, but it also makes the heroes look like dangerously incompetent doofuses with very poor discipline.

11) Luke doesn't seem like the kind of guy who'd go into a child's bedroom with the intent to murder the kid in their sleep, even if it's only a momentary lapse in judgement. And if he did, Luke would right that wrong, not sulk on an island for 20-40 years.

The whole late night visit with the laser sword smacked of child abuse.

How does Rian Luke fit with Lucas Luke? They seem like different characters.

Hamill is a trooper, but he has valid complaints.

He understands his character far better than Rian does.

13) Why were the precious Jedi texts kept in the open air, on a wet island? They looked like they were made of paper. Was it special non-biodegradable space paper? Okay, I know, this is a quibble. Just kidding.

14) Poe talks to Finn and Rose while they are in hyperspace using a little walkie-talkie device. So now they can communicate across light years instantaneously. And no ship communication monitoring is going on that would alert Holdo. Really?

Since when could they talk instantly across light years even while in hyperspace?!? (I seem to remember a call from the Emperor over hyperspace radio in ESB, but I also remember this being an exception to the rule, that there were only a few devices in the galaxy capable of this. Maybe that was from Extended Universe material?)

If they can, why not call for help earlier? Why not get on space radio and tell the galaxy what's happening? Why is there no Space TV? The whole galaxy can know what's happening instantaneously... that's huge. Why isn't the Rebellion using this? Do they have no PR people?

In The Force Awakens, the Space Fascists use a planet-based hyperspace-laser (?) to fire (presumably) between star systems. Yet we can see the laser beam moving in slow-motion past Ren's ship. If it is so slow you can see it move, how does it get to destroy another star system before someone notices it coming and uses instantaneous space radio to alert people? Stars are light-years apart. If it was a hyperspace-laser, I missed the line of dialogue, and the visuals certainly didn't convey it. And once the planet's laser sucked up the sun (what on earth is left of the sun at this point? Suns are massive), where did it get it's heat from? What about the gravitational effects? Was the planet mobile, too? It'd have to be, if it ever wanted to fire the big laser again.

In Star Wars, why didn't Han just turn on his hyperspace-radio and find out that Alderaan blew up? Surely some trader's spaceship (Alderaan would have had considerable space traffic, would it not? There'd be space trade. They had a war about trade routes before sometime, I seem to remember.... wait, don't remember...) saw the planet blow up. Wouldn't they have spread the word?

Didn't Tarkin want to use the destruction of Alderaan for PR purposes, to intimidate? You can't intimidate if no one knows about it.

Is this new tech? When did this happen? Why am I not getting the memos?

Do the rules go out the window the moment it's inconvenient? And if the rules are completely fungible, how is there any drama? You just change the rules to get the characters out of trouble.

15) What the heck is going on with the state of the galaxy? I know it'd require an info dump, but honestly, it's not clear. What happened to the victory at the end of Return of the Jedi? Why can't you give us a one-two minute breakdown of where we're at?

The whole thing seems like a movie-reset, so they can milk conflict between Empire and Rebels and sell the same sort of merchandise in perpetuity. The galaxy isn't moving forward, but forcibly set in place.

This universe could be, should be, bigger than that.

I didn't like the prequels, but at least they weren't as much of a rehash.

16) Subverting expectations is good, but when you put in threads and dangle mysteries and then repeatedly go "Ah-ha!" it's just annoying. Why throw in so many narrative dead ends? It felt like too many things going nowhere. Am I watching Game of Thrones?

17) How long do hyperspace jumps take in this galaxy now? I thought they used to take awhile. Days, even. Now they seem much, much faster. According to some, the whole thing only happened over a few hours, although days obviously pass with Luke and Rey's subplot. Time in Empire Strikes Back was screwy like that too, but here it feels worse because the subplots are so boring.

18) Was it my imagination, or did a laser bolt bounce off of Captain Phasma's armour in one scene? If so, why don't all stormtroopers wear reflective armour? Their space armour seems pretty useless otherwise. And it's not like the First Order is cash strapped, what with their monster-sized battleships and planet-sized space lasers. Why skimp on reflective space armour?

Was Phasma hogging it all? Did she want to keep that edge all to herself?

The stormtroopers should unionize.

And why not make their ships reflective too?

19) Why did you have the two characters who have the least chemistry together kiss? It'd make more sense if Finn and Poe had.

So there you go. Just some of my silly questions. Granted, many of these things you just have to look over in a sci-fi space opera type film. But if the narrative is working, these thoughts don't occur.

Rian Johnson makes some really counter-intuitive story choices (unceremoniously slicing Snoke in half, for example, early on), which surprised me. That was great. I thought Snoke might have been wounded, but wow, no, they flat out cut him in half.

On the other hand, some of Rian's zigs I really didn't jibe with (see Luke above).

But it was also a long film, felt that way, and was filled with holes.

Maybe the third one in this new trilogy will be better.