Apparently this has been tooling around the internets for awhile now, and there are oodles of variants. The original was by Dan Meth and can be seen here. I've included it below as well for reference: 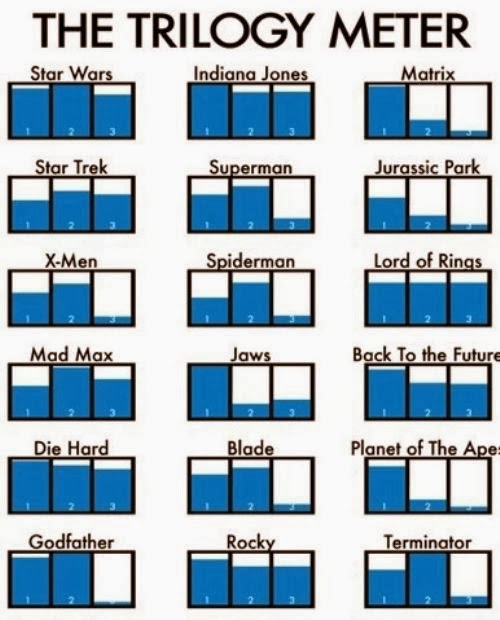 Great stuff, but as you can see, some of the ratings are a bit off. So I've done up my own version below, 'correcting' the errors. Personal opinion: everyone has one, along with a butt hole.

My version is mostly sympatico with the original, only more so. 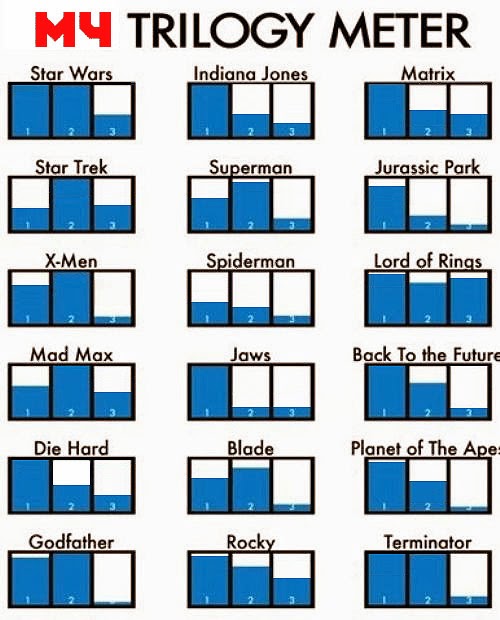 Easily readable charts of pop culture phenomena are a lot of fun. We've all seen the films. This is one meme that took off and can be found all over the internet. Some even expanded it to include entire series.

I'm with mainstream opinion on several of the franchises, particularly Die Hard (first the best), Superman (second the best), The Godfather (the third stinks), and The Matrix (first, natch). Some things are just obvious.

The original Star Wars trumps Empire though. New Hope has a great ending, one of the most climactic in cinema history. That's what sets it above Empire, which, while a great film, lacks a really satisfying conclusion. It's a middle chapter and suffers for it. Jedi, on the other hand, is generally overrated, even as a mediocrity. The film is a mess. Luke's 'plan' is nonsensical, the Ewoks are preposterous, and the Death Star Mark II repetitive. Only Ian's cackling Emperor stands out. It's fun, but not on the same level as the first two.

Raiders of the Lost Arc is the perfect adventure flick, the best ever, and miles ahead of the two sequels. Spielberg skirted the edge of believability with the first, and  felt he had to stage even more outrageous stunts in the sequels. This bursts the bubble of disbelief and the series descends into slapstick. Temple of Doom is bad that way, but the third is even worse. It's flat out parody. Sean Connery and Ford mug for the camera and do an imitation Abbott and Costello comedy routine. The whole thing is embarrassing.

The Matrix sequels I enjoyed; I may be the only one who did. There are a lot of ideas packed into these films, which make the overlong fight sequences bearable. The cinematography and staging are excellent. They're fascinating thematically and can be viewed on multiple levels, delving into philosophical issues that the mass audience found off putting. Understandably so, I suppose. The first, of course, is miles ahead of the two sequels (as is so often the case). It was a genre expanding experience that only happens once or twice a decade.

Star Trek: The Motion Picture is a slow paced, majestic bore. The fabulous Wrath of Khan more than makes up for it. I don't even remember the third.

The first two X-Men movies are remarkable. The second is the best; the underlying themes, exploring conformity and persecution, work even better here than in the first. It's one of my favourite superhero films, after The Incredibles.

Spiderman I've never been able to get excited about. Just doesn't interest me. Pretty much same for Blade, which I've left as is because I can't remember the series well.

All of the Lord of the Rings movies were enjoyable, but the first was particularly strong.

Jaws is the only one worth watching for my money, but it's a tremendous treat. Made me afraid to swim in the pond when I was little.

Back to the Future is a fun filled banana split sci-fi/comedy sundae. The sequel is the cherry on top. The third film, in which Michael J. Fox plays everyone in the past, is a spill on the floor.

Die Hard is the urban version of Raiders: the perfect action flick.

Beneath Planet of the Apes is underrated and widely derided, but I like it. The contrast of telepathic, pacifist mutants who worship an atom bomb with the aggressive, militaristic, primal ape society is a wonderful juxtaposition. Intellect vs. instinct, and neither comes out looking good. The sets of depicting the ruins of New York are great, at least to my nostalgic eye. After this film, however, they really had to stretch (for reasons that the ending makes obvious) to get a third entry, and that's when the series really fell flat. The continually diminishing budgets didn't help either.

The first two Terminator films are tremendous. I'd rate the first one higher than the second, in all honesty. It was so refreshing at the time.

The rest? Watch at your own risk.
Posted by James Turner at 07:49